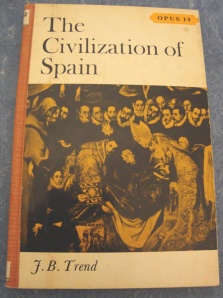 John Brande Trend (1887-1958) was the first Professor of Spanish at Cambridge University. He was appointed to the chair of Spanish in 1933. His friendship with Edward Joseph Dent, Professor of Music at Cambridge between 1926 and 1941, was to play an instrumental part in Trend’s passion for Hispanism. His first degree was in Natural Sciences, but he soon developed a keen interest in Spanish life and culture and would later become a prime figure in Spanish musicology. Trend admired Luís de Góngora, one of the most influential poets of the Golden Age, and Manuel de Falla, possibly the greatest Spanish composer of the twentieth century.

Four box files of Trend’s correspondence and papers (dated ca. 1930-1955) are held at the Manuscripts and Archives Department of the University Library. His correspondence shows various aspects of the way he worked – in particular, his research activities in Spain. The papers include drafts of essays, translations of poetry, and lectures and letters to Trend, mostly from the last decade of his life. Amongst his correspondence, there are letters from Rosalía de Castro, Ruben Darío, Federico García Lorca, Jorge Guillén, Juan Ramón Jiménez, Antonio Machado, José Ortega y Gasset, Alfonso Reyes, Marqués de Santillana and Miguel de Unamuno.

General enquiries about the Archive may be addressed to the Manuscripts & Archives Department. Alternatively, click here for further details.

1 thought on “J.B. Trend, first Professor of Spanish at Cambridge”