The collections of the University Library contain a comprehensive selection of works by major French writers, with a special emphasis on authors currently taught or researched at the University of Cambridge.  The geographical coverage of the collections is particularly wide, including not only France, but areas that are or have been under French influence, such as French overseas territories and former French colonies. The Library actively continues to acquire works which are significant in the contemporary Francophone world. 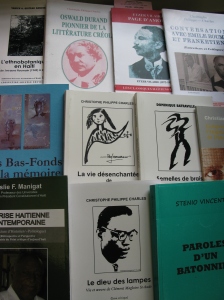 The vast majority of the books in French that we purchase are published in France itself. The French publishing industry is active and prolific– we buy books from France on a broad variety of subjects. However, we do not confine our book purchasing to France. In addition, we actively seek out books from other countries where books are published in French. In a sequence of blog posts we will try to give an idea of the Library’s collecting activity from French sub-Saharan Africa, French-speaking Canada, Réunion and Mauritius, Martinique and Guadeloupe.

Acquisition from some of these areas is very straightforward, but from others it is rather problematic. Countries may publish extensively in French, but distribution networks are very poor, even in the 21st century. It is difficult to find out what is being published, and even harder in some cases to acquire the material.

We make fairly regular purchases of books from Haiti. The Library’s collections currently includes almost 100 books with Haitian imprints, over half of which are in French. Recently we have been working with a vendor called Libros Latinos, who specialises in Caribbean and Latin American books and makes annual book-buying trips to Haiti. We have a good collaborative relationship. Libros Latinos will only ever have a limited number of copies of a title in stock, but if we are too late when requesting a title and all copies are sold, the vendor makes every attempt to secure a copy for Cambridge on their next book-buying expedition.

Some of our recent purchases from Haiti have been for older books, filling gaps in our holdings of Haitian authors and of Haitian academic works. Literary texts and criticism are a primary focus of interest, but we also acquire some titles in anthropology, history, politics, linguistics and social science. Here is a selection of our most recent acquisitions from Haiti:

As always, we are happy to receive recommendations for new purchases, from Haiti as well as from the rest of the Francophone world.