Many of us will have been hooked by Luca Zingarelli’s portrayal of Inspector Montalbano in RAI TV’s recent adaptations. Set in Sicily, excellently cast and scripted, these detective stories have been one of the highlights of BBC 4’s foreign language drama series, cleverly broadcast with subtitles rather than dubbed, thus retaining the magic of the original.

Andrea Camilleri, born in Porto Empedocle, Sicily, in 1925, wrote his first in a long series of novels featuring the character of Inspector Montalbano, in 1994. Hugely popular, these novels and short stories, set in Vigata, a thinly disguised version of his birthplace, have captured the public’s imagination and have graduated from being popular bestsellers to being part of the canon of contemporary Italian literature.

There is a serious side to the stories. As Salvo Montalbano moves from one case to the next, there is an undercurrent of melancholy. We see the Mafia at work and the endless bureaucracy in the police force, and we are shown contemporary Sicily in all its colours, the drab as well as the bright.

Yet as the plots unwind and the characters come to life there is also an underlying humour. Montalbano loathes the mountains and is happiest by the sea; his moods are totally dependent on the weather; he seems constantly preoccupied with where and what his next meal will be; he refuses to talk while eating, preferring to savour every mouthful. His favourite foods soon become familiar: we can almost taste Adelina’s arancini. The Commissariato, or police station, buzzes with activity and his colleagues are vivid characters in their own right: the simple but loyal Catarella, with his effortlessly garbled malapropisms; the efficient, indeed somewhat obsessive Fazio; and Montalbano’s right-hand man, the ever so slightly vain ‘Mimi’ Augello, one eye on the case and the other on the girls. Then there is Livia, Salvo’s long-standing girlfriend, who visits occasionally from her home in Genoa and who is a constant reminder that mainland Italy, though a world away, is never very far.

Camilleri’s language is a captivating blend of Italian with a heavy sprinkling of Sicilian words and phrases. Not difficult to understand, these add to the local colour, drawing us in. 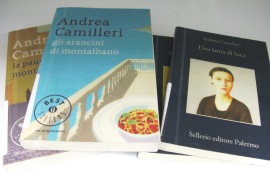 The novels and short stories are not long, mostly published by Sellerio in small format. Initially, here at the UL, we left these as paperbacks to be consulted in the West Room, as we do with most small-sized Italian contemporary fiction. But these stories cry out to be read. So now their covers are reinforced so that they can be borrowed.

So, if anyone is tempted to dip in, these are some of our holdings: 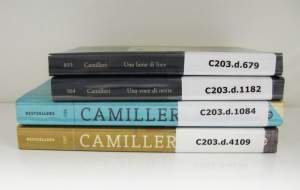