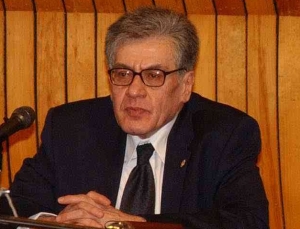 Less than two weeks after the death of his close friend Juan Gelman, a fellow Cervantes Prize winner and near neighbour in the Condesa district of Mexico City, the great Mexican writer José Emilio Pacheco passed away on January 26, 2014.

Whilst Gelman (having very personal experience of the horrors of right-wing dictatorship) was outspoken in his left-wing allegiances, Pacheco was much more politically ambiguous and ambivalent in his writing. His most popular work, the novella Las batallas en el desierto (classmark: 9743.d.1564), looked back on a fictionalised adolescence during the post-war presidency of Miguel Alemán (1946-1952) – a period of great optimism, growth and development in Mexico’s history. However, rather than straightforward nostalgia, the story reveals the seeds of corruption and inequality that would come to trouble the country’s growing population throughout the 20th century.

This duality is evident from the opening paragraphs of the story, where Pacheco follows a list of fondly-remembered childhood radio programmes by also recalling “It was the year of polio […] the year of the foot-and-mouth-disease […] the year of the floods” [from Katherine Silver’s translation in Battles in the desert & other stories, classmark: 744:79.d.95.30].

Pacheco’s poetry formed the bulk of his literary oeuvre, and often commented on the ills and injustices of society and humanity (but never offered strident solutions or proclamations) in a precise and restrained style that reflected his personal diffidence.

He was often called Mexico’s greatest poet, but once said, in reference to Gelman, that he was not the greatest poet in his neighbourhood, let alone the whole country. He published vast quantities of poetry, but rather than forming Neruda-esque magnum opuses, these were generally compiled in an unpretentious and functional chronological form:

Intertextuality and the playful use of other writers’ work are prevalent throughout Pacheco’s poetry, as discussed in Carmen Dolores Carrillo Juárez’s book El mar de la noche : intertextualidad y apropiación en la poesía de José Emilio Pacheco (classmark: C206.c.8441). Ronald J. Friis notes in his book Jose Emilio Pacheco and the poets of the shadows (classmark: 743:4.c.200.10), regarding the gradual changes in the poet’s style throughout his oeuvre: “Pacheco’s search for a unique voice is always haunted and supplemented on the page by his knowledge of the impossibility of true originality”.

In a way, this literary viewpoint is reflected in some of the ideas he conveys about the futility of mankind and history. Pacheco frequently stressed the importance of remembering the past (in all its often unpleasant details), but – as Merlin H. Foster writes in Tradition and renewal: essays on twentieth-century Latin American literature and culture (classmark: 743:11.c.95.102) – was also “painfully aware of cyclic time and transitory human experience”. To quote Alastair Reid’s translation of an early poem in the collection Don’t ask me how the time goes by (classmark: 743:36.c.95.165): “I belong to a transitory time, to a world which crumbles before my eyes”.

In contrast to Pacheco’s own modesty regarding his literary abilities and accomplishments, readers and, especially, other writers have long held his work in extremely high regard. No lesser authorities than Octavio Paz and Mario Vargas Llosa comment on his writing in the collection José Emilio Pacheco ante la crítica (classmark: 743:4.d.95.13). He will be sorely missed by the literary community and world at large.