A lecture will be given by journalist and biographer Ian Thomson on Pierpaolo Pasolini on Monday 29th June. 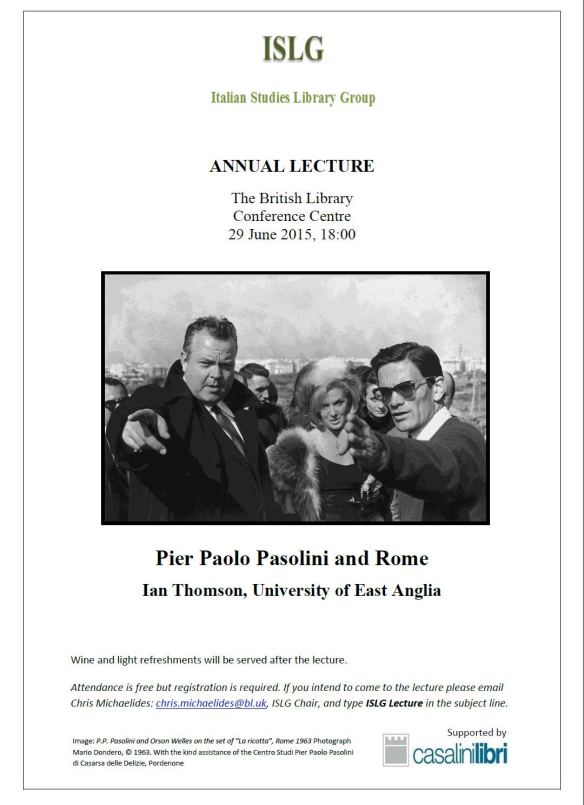 Pier Paolo Pasolini was born in 1922 in Bologna. An incredibly versatile and controversial intellectual figure, he was a master of different genres. A poet, a playwright and a novelist, he also directed films and acted. He was a journalist, a philosopher, an artist as well as being a political figure, and has come to be regarded as one of the leading visionary thinkers of his time and as a major figure in Italian literature and art. He moved to Rome in 1950 and from then on it was the Roman suburbs that provided him with much of his inspiration. In 1970 he bought a castle north of Rome where he wrote his last novel, Petrolio, which remained unfinished at the time of his death. He was murdered in 1975.

Our holdings of his works here in the UL are extensive and cover his immense variety. As well as works by him, there are numerous biographies, for example: Pasolini, una vita : edizione riveduta e ampliata con documenti inediti / Nico Naldini ; a cura di Simone Gianesini.

Pasolini’s increasing importance has meant that we have tried to fill any gaps in our collections where we can. We were particularly pleased to be able to acquire recently a 1982 work entitled: Pierpaolo Pasolini : corpi e luoghi / prefazione di Paolo Volponi ; a cura di Michele Mancini e Giuseppe Perrella.