Browsing through our recently received Spanish books I came across the weird-looking cover of Yo, Claudia, a collection of articles published in the Argentinian monthly magazine Claudia, roughly between 1966 and 1970.

Yo, Claudia gathers a selection of letters and essays written by the poet Olga Orozco (1920-1999), who, during her life, undertook many jobs to 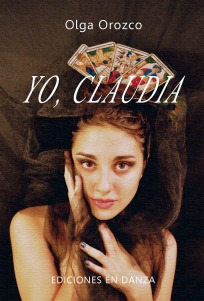 support her literary interests, from journalist to radio drama actress. Her work for Claudia, however, is particularly interesting. Claudia’s readership was interested in articles on fashion, entertainment, art, politics and literature, written by some of the most prominent intellectuals of the time. What originally was an asset eventually became a problem when in 1976 the publisher had to flee to Brazil, as it was accused by the Argentinian regime of supporting subversive journalists. Orozco’s collaboration was certainly valued, although, in order to please the publisher, she had to conceal her identity under eight different pseudonyms, each one for a different column.

Many writers have used pseudonyms for literary works. Just in Argentine literature we can list Almafuerte, the pseudonym of the poet Pedro Bonifacio Palacios; César Tiempo, Spanish pseudonym of the Ukrainian-born writer Israel Zeitlin; and Honorio Bustos Domecq and Benito Suárez Lynch, two pseudonyms for the collaborative works of Jorge Luis Borges and Adolfo Bioy Casares. When a whole other identity emerges from a pseudonym we get heteronyms, which allow authors to experiment with different styles. The concept of heteronym, however, is quite recent and was introduced in the early twentieth century by Fernando Pessoa: his most famous heteronym is Ricardo Reis, a Portuguese doctor born in Oporto and exiled in Brazil for political reasons. The nature of heteronyms, as Ricardo Reis exemplifies, entails a complex background story, something that didn’t stop Pessoa from having about seventy of them.

Orozco’s identities, born out of mundane rather than literary needs, struck me as something in between pseudonyms and heteronyms. This is because she did not just have one

name to conceal hers, but four female and four male identities which, despite not having thought of elaborate background stories, she used in different columns. Valeria Guzmán answered letters from readers; Valentine Charpentier portrayed historical characters; Richard Reiner wrote on mystery and occultism; Elena Prado dealt with investigative reports; Jorge Videla and Carlota Ezcurras commented on recent events; Sergio Medina told the life of celebrities; Martín Yanez was in charge of book reviews.

The column that reveals more about Orozco’s real personality is perhaps that of Valeria Guzmán. Even though her section was called consultorio sentimental, she answered a variety of questions (Are women worse drivers than men? How can I become an international spy? What is the life of a poet like?) with dry wit and sometimes sarcasm. My favourite example involves a reader who wanted to change the colour of her eyes and Orozco’s advice was: ‘It’s possible to change the colour of your eyes. For a transient reddening I recommend slicing onions, surrounding yourself in a cloud of smoke, causing yourself intense physical pain or a pathetic sentimental failure (the kind that has the merit of transferring its tear-producing effectiveness to good memories)’ (page 19, my translation).

Witty jokes aside, Olga Orozco remains one of the most important authors of Argentine literature and the UL holds all of her work. Among the latest books published we have:

El jardín posible, a selection of poems written in her last few years;

Poesía completa, a volume that gathers all her poems.