Some 160 Spanish broadsides (known as “aleluyas” in Spanish) have been recently added to the Cambridge Libraries catalogue. They were bequeathed to Cambridge University Library by Edward Meryon Wilson, former professor of Spanish at the University of Cambridge. The collection contains a complete run of one of the longest series of aleluyas ever printed in Spain: the Marés-Minuesa-Hernando series, consisting of 125 numbers. According to Jean-François Botrel [1], the printer Hernando would have acquired this collection from the printers Marés-Minuesa in 1886 and would have started reprinting it shortly afterwards. 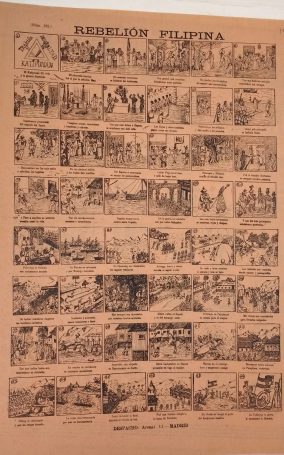 The aleluya is an old form of cartoon or comic strip, the equivalent of today’s illustrated press, printed on a single sheet with 48 wood-blocks of images (sometimes less) in eight rows of six images each. In the 19th century, they appear accompanied by rhymed captions below, printed in cheap coloured paper.

The term aleluya originated in Castile to refer to small prints with drawings and verses about Jesus Christ that were distributed in churches on Easter Sunday. They originally had a religious purpose but, with time, they diversified and came to cover a wide variety of topics. 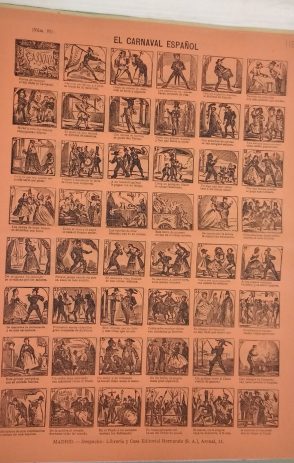