One of our department’s significant responsibilities is modern donated collections.  Our blog has chiefly focused on such collections in European languages, but this post looks at one largely in English – the collection of Professor Sir Alan Bowness, former Director of the Tate.  Recent arrivals in the Bowness collection include items from the library of Dame Barbara Hepworth.  These came to us with the aid of Sophie Bowness, the art historian and maternal granddaughter of Dame Barbara. 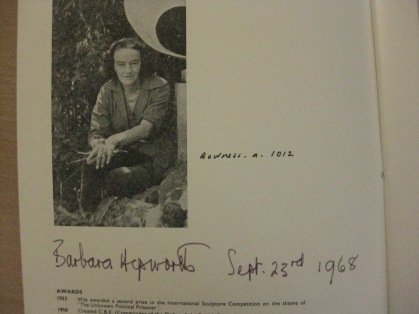 We have so far received from Sir Alan several thousand items, chiefly exhibition catalogues – from major shows to small – and related ephemera such as private view cards.  It is an extraordinary collection and one which is gradually making its way into the iDiscover catalogue.  All items in the collection have the classmark stem Bowness. so a browse search by that classmark will reveal the titles catalogued so far (use the arrows on the left-hand side of the iDiscover screen to scroll down).

The recent donation of Hepworth titles as part of the wider Bowness gift was generously arranged by the sculptor’s granddaughter and Sir Alan’s daughter, Sophie Bowness, who compared the UL’s holdings of Hepworth with the stock of titles held by the family and estate.  Thanks to her efforts, we now have 35 new volumes, chiefly catalogues.  These have been placed together within a specific classmark span, from Bowness.a.1000 to Bowness.a.1035.  The covers of these wonderful new additions are below.  Click on an image to see a larger version of it.

Those Hepworth publications which predate the sculptor’s death in 1975 came from her own library, so the catalogue records for these contain a Cambridge-specific “former owner” note for her.  Two of the books (Bowness.a.1012 and Bowness.a.1015) have her signature in them, and the records for these items record her as an inscriber.  Two other catalogues contain private view cards; these can be spotted in the final image above and in another about halfway through the list.

It is exciting to handle such material, and the Bowness collection presents the cataloguer with very interesting, as well as challenging, work.  While other libraries may have the more weighty exhibition catalogues, this collection contains hundreds upon hundreds of slight catalogues and private view cards that would easily have been rejected as too ephemeral for retention by librarians at the time.  Through Sir Alan’s generosity, Cambridge is acquiring a unique resource about the UK art world of the 20th century.  Further blog posts will appear as we continue to work through the collection.

1 thought on “Barbara Hepworth books and the Bowness collection”