Last week was the Semaine de la langue française et de la francophonie, so it is a good occasion to consider the famous French lexicographer and publisher Pierre Larousse (1817-1875).

The son of a blacksmith and an innkeeper, Pierre Athanase Larousse was born in Toucy (Burgundy) in 1817. He was a very good student and, not surprisingly, an avid reader at a time when books were distributed by peddlers. To some extent he was a free spirit, out of the conventions of his time. He cohabited for many years with Suzanne Pauline Caubel, before marrying her in 1872.

In 1834 Larousse won a scholarship to become a student-teacher at the école normale in Versailles. Between 1848 and 1851 he worked at the Institution Jauffret, a private secondary school in Paris, where some good teachers inspired him. It was at that school that he met Suzanne Caubel, his life companion. While teaching, he worked on his first book, La lexicologie des écoles primaires, published in 1849 at his own expense. His first readers were fellow teachers. Larousse was an autodidact, with broad cultural interests, attending lectures and frequenting Parisian libraries and theatres.

He was an outstanding pedagogue who founded and edited two journals on education: L’École normale (1858-1865) and L’Émulation (1862-1864). In both, he encouraged passionate young students and in the later journal, he proposed a contest among young readers, offering an annual prize. His dedication was rewarded with a large number of followers: in October 1862, he counted around 9,200 subscribers to L’Émulation even before having started its publication. He published educational texts for children covering varied subjects.

His contributions to lexicography were remarkable. He was a pioneer in “school lexicography”. After La Lexicologie des écoles primaires (1849), a complete course on French language, he published several works on French grammar, orthography… (see a list of his works).

In 1852, Larousse founded with another former teacher, Augustin Boyer, the Librairie Larousse et Boyer. Both were neighbours and associates until 1869. The bookshop/publishing company was a prosperous business, profiting from their successful school manuals and several dictionaries. At that time, Louis Hachette, the founder of Librairie Hachette – another emblematic French publishing company – was a well-established publisher, which had started in 1826 with educational books, broadening its scope later. 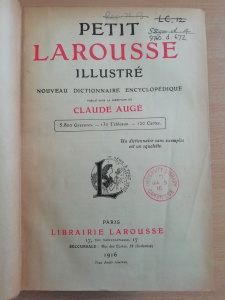 Larousse published the Nouveau Dictionnaire de la langue française in 1856, the Dictionnaire complet de la langue française (8700.d.556), and the very popular Petit Larousse illustré (1906, 9760.d.672), edited by Claude Augé, another pedagogue and lexicographer who worked closely with Larousse. Pierre Larousse’s major work was the Grand dictionnaire universel du XIXe siècle (1866-1876, referred to as GDU) in fifteen volumes (plus two supplements), completed after his death by his nephew Jules Hollier-Larousse. This encyclopaedic reference work had a didactic purpose and was characterised by its high quality grammatical analysis. Larousse paid attention not only to the etymology and definitions, but also to linguistic explanations, including comments on grammar, orthography and usage, illustrated by examples, something which had been less developed in previous French dictionaries.

Its immediate predecessor, the Dictionnaire de la langue française (R785.F22) by Émile Littré was published between 1863 and 1872 but differed in many aspects from GDU. The Littré, as it is often referred to, was successful among cultivated readers. It is an authority, but it is less modern than Larousse in some ways, for example, paying too much attention to archaic etymologies and pronunciations. In contrast with Littré, Larousse focused on the vocabulary of his time and targeted a much broader audience. In addition, the GDU was a collective work; Larousse gathered entries by many contributors, while Littré used little help. 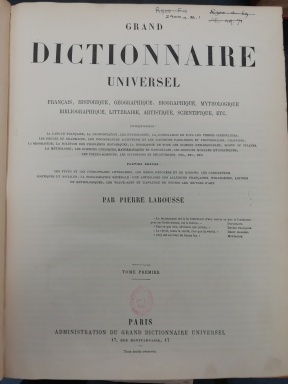 In the GDU there are many subjective comments, something common at the time but avoided in later reference works. It is fair to say that the GDU lacked impartiality, particularly in the definition of terms on history, politics and religion. The deliberate anticlericalism of the dictionary is an eloquent example. For that reason, the Catholic Church included this encyclopaedia in its Index librorum prohibitorum (Index of prohibited books). For Jean Pruvost, Larousse’s objective was the diffusion of republican thought, in order to install a democratic and secular society (he could be considered as a precursor of the hussards de la (IIIe) République). For instance, the GDU justifies what happened during the Terreur, the most violent period of the French Revolution: “Il sera toujours facile de calomnier la Révolution française en feignant de confondre son principe avec les combats terribles qu’elle eut à soutenir pour l’appliquer.”

Librairie Larousse also published on a monthly basis the Larousse mensuel illustré (1907-1957) an encyclopaedia with a journal format, under the direction of Claude Augé who took over the publishing house after Larousse’s death on 1875. In 1920, Augé was replaced by his son Paul, who also edited the Larousse du XXe siècle (1928-1933, R900.F8).

Pierre Larousse’s impact went even further than the francophone world. For instance, his dictionaries and encyclopaedias were translated and adapted to the Spanish context, and were popular in the 20th century. His Pequeño Larousse ilustrado was published as early as 1912. Cambridge University Library holds an early copy (1913. 790.d.91.2) with  the cover illustration the same as shown in the picture of the French edition. It combines two symbols which are still used in the Larousse logo: the dandelion accompanied by the logo “Je sème à tout vent” (I sow in the wind), which refer to the natural diffusion of knowledge, and the Semeuse (Sower), who became in the late 19th century an allegory of the French Republic.

Larousse was an admirer of Diderot, but unlike in the 18th century Encyclopédie (7900.a.13-29), Larousse wanted to teach everyone about everything, not only the elite. The monumental Grand Dictionnaire universel is one of the most influential encyclopaedias of the 19th century. Éditions Larousse did not die along with Pierre Larousse but successfully continued publishing educational and reference materials until today. The most important and influential encyclopaedias Larousse published in the 20th century are the Grand Larousse encyclopédique (1960-1964, R900.F3), the Grande Encyclopédie Larousse (in 20 volumes, 1971-1978) and the Grand Dictionnaire Encyclopédique Larousse (1982-1985, R900.F9).