The Gilets jaunes appeared as a populist, grassroots protest movement that developed in France in the autumn of 2018. Fuelled by social media, it crystallised on 17 November 2018, with the organisation of mass demonstrations and the blocking of roads, which continued through the winter of 2019.

The focus of the discontent was a projected increase in the fuel taxes (the yellow vest is a high-visibility jacket that is part of the compulsory equipment for French drivers in the event of an accident), which was eventually cancelled, as well as the abolition of the “impôt sur la fortune” (a form of solidarity taxation) promised during Emmanuel Macron’s presidential campaign. 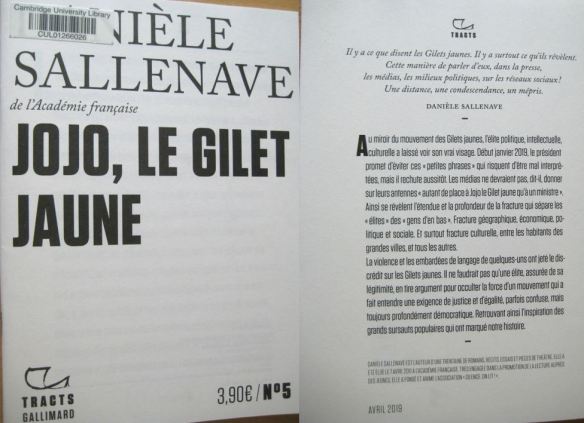 The movement developed through both social media (with a mistrust of traditional media raising questions of bias, disinformation, and fake news, for example around the questions of violence occurring between the Gilets jaunes and the police) and actual protests.

More generally, the Gilets jaunes movement expressed social discontent from rural or peri-urban areas, and working or middle class groups, who feel increasingly socially and economically dissociated from the elites and left behind in the current capitalist, globalised world order.

The Gilets jaunes’ mistrust of the extant political order was associated with the promotion of direct participation (referendums), which led Emmanuel Macron to introduce the “Grand débat national” (December 2018 to March 2019). This consultation of French citizens on four themes (ecology, taxation, public services and democratic debate) was followed by measures such as a decrease of the income tax and more favourable conditions for small pensions.

Politically, the Gilets jaunes did not lead to the creation of a successful new political party but, as it was focused on the opposition to the character and politics of President Emmanuel Macron, seems to have mainly benefited the extreme right movement of Marine Le Pen (Front National⁠—FN—, renamed Rassemblement National—RN—, from 1 June 2018). 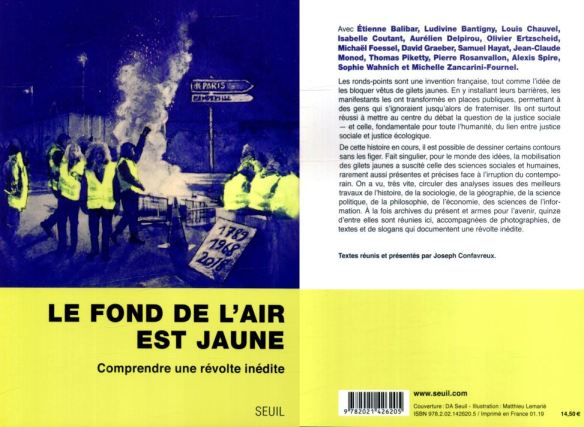 Although most of us would have watched and read about the Gilets jaunes movement and its unfolding through traditional and social media, less than a year after the movement started, several books, essays and anthologies have been published on the topic: 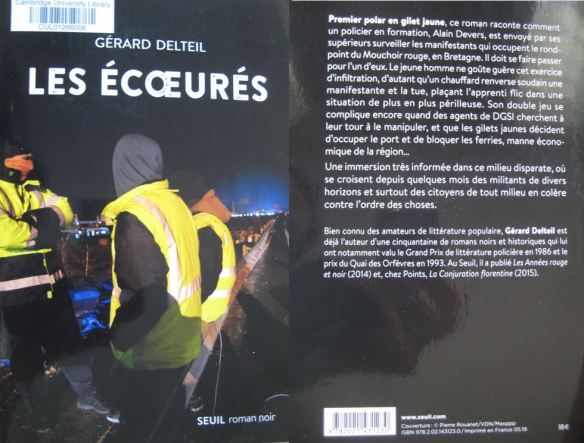 Les racines de la colère is a hybrid book which combines a short graphic story focusing on the recent history of the town of Denain in the North of France, and its economic downfall, followed by a fotonovela or photo report featuring the portrait and the stories of a set of its inhabitants. Though the book is not focused on the Gilets jaunes, it sheds light on the background and situation of some of the people who joined the movement. The title combines a reference to the 1939 novel by John Steinbeck, The Grapes of Wrath, which also explores the social and economic aspects of work migration, and a reference to the 1956 novel by Romain Gary, Les Racines du ciel, which also questions a world-order dominated by economic interests, and on a more metaphysical level, the relation of men with the earth.

Denain, previously a mining town, became a major industrial steel hub in the 19th century, until the brutal closure of the Usinor company in 1978. The use of the fotonovela / photo report introduces the reader to the life and struggles of a variety of people, generally of a modest background, and the limited choices they face, given their history and skills. While the photos provide realism and authenticity, the transcription of dialogues in bubbles, though conveying the spontaneity and idiosyncrasy of the exchanges, also points to the artificiality of what has been selected and presented as a coherent story. The fotonovela covers a variety of aspects of life in Denain, from peoples’ access to social services and public transports, to their decision and struggle to live on public benefits, or to their exhausting and exacting work mobility. It shows people living on the edge, scraping by to make a living, facing hardship and financial uncertainty, highly critical of President Macron and the social and economic elites from whom they feel utterly separated, but finding in family relationships and in their attachment to their hometown (which some of them never ever leave) strength and continuity.

At the end of the book, three experts, two sociologists and a geographer, analyse the socio-economic situation of the individuals and families appearing in the book, examining the context and consequences of deindustrialisation; the obstacles to mobility (and related economic opportunities) for people of a modest background; and showing how immobility is both a constraint and a choice, a way of living and a coping strategy for some people affected by poverty.

The author, Vincent Jarousseau, is a photographic reporter who presents his work as an investigation, which also implies of form of social commitment and political engagement. His position is explained in the short “Avant propos” and in the concluding letter addressed to President Macron, which finishes with these words: “La France des oubliés n’a cessé de vous interpeller. Ce livre est un prolongement de ce cri qu’il est impératif d’entendre” (p. 161). In many ways, the fotonovela is an ethnographic work, and it might have been interesting to know more about the relations established between the journalist, the experts, and the people of Denain, partially enlightened by the concluding “Remerciements”, in the context of the economic, social and cultural divisions or estrangement which are expressed throughout the book.