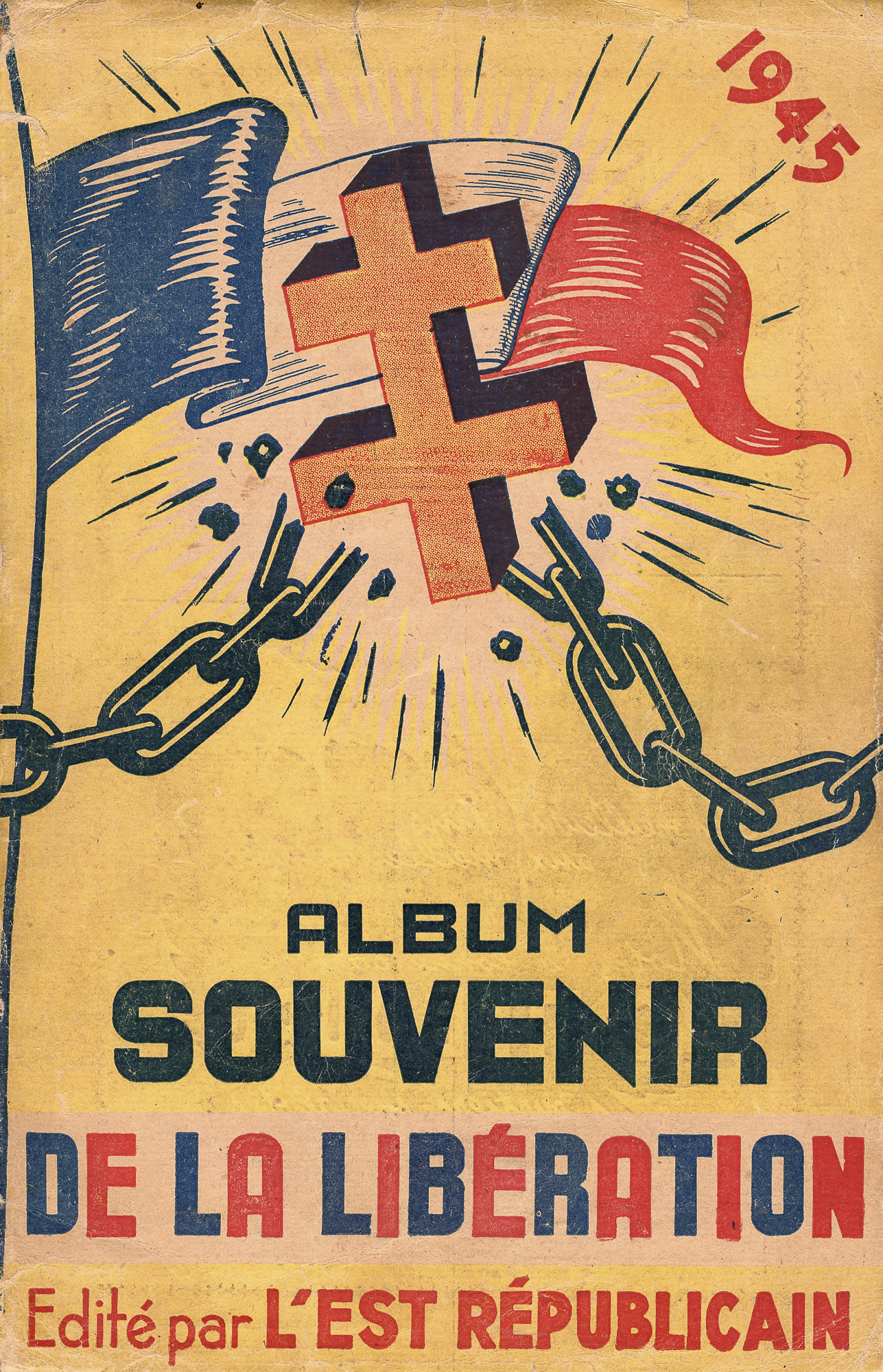 In 2019, I spent 9 months helping to process the Liberation collection, a donation of over 3000 books in French published at the end of the Second World War. As this project is coming to an end, and with the current atmosphere lending itself to pause and reflection, now seemed a good time to share my experience of working with the collection. This will not be a full and objective review of what you can expect to find in it, but rather a more personal spotlight on what struck me the most.

When I started cataloguing it, I expected the donation would give me a complete and accurate view of what these extraordinary times were like in France. Yet if there is one thing that I will take away from it, it is that it is impossible to have a full understanding of history when you are caught in the middle of it.

In some respects it is astonishing how different our views on the war are now, compared to people’s opinion of it as the horror was unfolding. For example, it is now commonly accepted that what produces autocratic regimes, fascism, or genocide is a set of social and political conditions and decisions, and not the inherent nature of one people; what the Germans and Italians did, the French or anyone else could also have done. But this is not the view that quite a few books examining the root causes of war in the collection embraced: powerless to understand the catastrophe that just occurred, the authors of these works attributed it not to fascism and antisemitism, but to the German spirit. It was in the German culture, psychology and genes to believe that the German people were born to rule over other nations; they were simply evil by nature and future war could only be avoided by crushing them completely.

Contemporary Franco-German friendship is impossible to foresee from these books – my grandparents lived through this period yet it seems centuries away. As I went through the collection, and its catalogue of crimes committed by the Nazi army, I often found myself pondering the same question: how did we collectively forgive the Germans so quickly? Maybe admitting that French hands were not entirely clean either helped (something that is rarely considered in the collection – books on the collaboration number only a few). But perhaps this should also be seen as a lesson of hope: reconciliation between warring nations, once peace and appropriate acts of contrition have been made, may not be as impossible as it seems in current conflicts.

Another interesting thing I took away from the collection is how people at the time viewed the Résistance. The word “Résistance” conjures up images of the maquis, coordinated by Jean Moulin on the ground and Charles de Gaulle from afar, but this is only the inside Résistance; before working on the collection, I was only vaguely aware of the huge importance of the outside Résistance, formed by the French army in exile and its allies (the Forces françaises libres). In the collection, the outside Résistance receives quite a bit of attention and is publicly celebrated: gala programmes, picture albums, children’s literature, books in honour of a specific regiment and so on. But what about inside Résistants? I was expecting that almost every book would be about them and yet I was surprised to discover that on the whole, not much more was written on or by them. Not only that, but the way the subject is treated is very different; most publications about the inside Résistance are personal accounts by the Résistants themselves, and not photographic reports or public celebrations programmes. I even had the impression that, whereas they are seen as heroes today, inside Résistants got a far more mixed reception at the time, so much so that people felt the need to write in defence of them. See for example Peut-on dire la vérité sur la Résistance? (Liberation.c.1952) by André Girard, codename Carte; or consider that Le crime contre l’esprit by “le Témoin des martyrs” (a pseudonym of Louis Aragon), a series of texts raging against the fact that very little notice is taken of the Résistants executed by the Germans, was republished several times in 1944 with a post-script about two new “martyrs” (the texts had previously been published illegaly under the Occupation).

I believe what this shows is that German propaganda was working: the Résistants were seen as terrorists. People’s experiences of living under the Occupation varied hugely and whereas some were exposed to German brutality, others were not. It was easy to think of the outside resistant armies as liberators, but as for the bands of ragged, angry young men who lived up in the mountains with their guns, requisitioned things so they wouldn’t be handed to the Germans and blew up soldiers from time to time, it was another story.

I thought the Liberation collection would give me a clear idea of the events in France in the last days of the war; but this was truly history in the making, written from different and sometimes contradictory points of view, by people who did not have the benefit of hindsight. It is fragmentary, raw and some of it can seem short-sighted in its triumphalism or too narrow in its focus. First-person accounts are abundant, but the most uneventful ones seem almost flippant and unnecessary contrasted with other tales of unbelievable hardships and slaughters.

In the end, if I want to get a true view of what war was like in France, I always have to come back to what my grandfather told me of it. Neither bombing railtracks nor denunciation of the Jews to the occupiers were part of his reality at the time; life was all about finding enough food and fuel for the family and escaping the allied – not German – bombings. His was not a story of heroic resistance, but neither was it one of abject collaboration; it was simply a story of survival.