Here are East View’s descriptions of their three newly available resources.  Do please provide feedback about them (and BiblioRossica and BiblioPlanet) through the standard form.

“This collection includes almost 6,400 titles by 300+ famous Russian authors, thinkers and philosophers of the 19th-early 20th centuries who made notable contribution to the development of Russian literature, philosophy and culture.

“The collection comprises the works of the world-renowned Russian playwrights, poets, essayists and historians, such as Chekhov, Pushkin, Lermontov, Mayakovsky, Bunin, Karamzin, as well as the less well-known in the West, but still prominent cultural icons of Russia, such as Averchenko, Belyi, Briusov, Fet, Giliarovsky, Gumilev, Leskov, Rozanov, Teffi, and dozens of others. 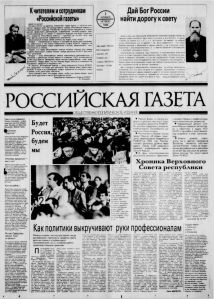 “Founded in 1990 by the government of the Russian Federation, Rossiĭskaia gazeta is a Russian newspaper of public record based in Moscow with 13 regional offices, and foreign bureaus in the US, France, the UK, Germany and elsewhere. Boasting a nationwide circulation, the newspaper covers domestic and foreign news, economics, culture, sports, and governmental affairs. With a daily print run of more than 180,000 and a large online presence, the Rossiĭskaia gazeta has become the go-to media outlet for government related news and official communiques and notices.

“As an official newspaper, its editorial policy reflects government’s policy on any given issue, although it frequently publishes commentaries and opinions that differ from government’s positions. As such the newspaper is an authoritative source of official government policy and an important venue of official commentary on laws and regulations enacted by the Russian legislature. It features interviews with influential Russian politicians, business, and cultural figures.”

“A popular Moscow newspaper focusing on sensational investigative reporting exposing corruption, abuse of power and violation of laws amongst government structures and financial-industrial circles close to them. Published twice a week.”

Plus I am also pleased to be able to confirm that access to the MIPP-mediated BiblioRossica and BiblioPlanet ebook platforms has been extended until the end of June (please see this earlier blog post for details about them; note that access to the Non-Fiction Library has ended).  Again, please provide feedback through the usual form.