As the world continues to respond to the impact of COVID-19, commentators have inevitably looked back 100 years to the 1918 flu pandemic (commonly known as Spanish flu although it did not start in Spain) during which millions of people died – estimates range from 17 million to 50 million. Many articles have been written in recent months comparing the two pandemics. This blog post focuses on a few artists who died in or survived the 1918 pandemic, and gives us the opportunity to look at some works of art in a virtual gallery courtesy of our ebooks provision, without the need to book in advance or to wear a face mask.

Perhaps the most famous artist to succumb to influenza during the 1918 pandemic was Egon Schiele (1890-1918), the renowned Austrian artist. Both he and Edith, his wife of three years who was six months pregnant, contracted the disease in October 1918 and died within days of each other.

Sketch of Edith Schiele done the day before she died, via Wikimedia Commons

To see works by Schiele click on the links below: 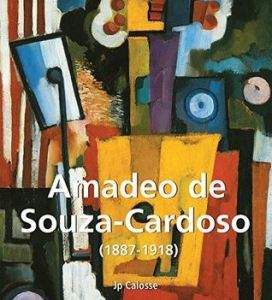 A near contemporary of Schiele’s but little-known is Amadeo de Souza-Cardoso (1887-1918), a Portuguese modernist painter who died in Portugal one week before Schiele. A retrospective of his work was held at the Grand Palais in Paris in 2016. The catalogue of this exhibition as well as a catalogue raisonné, produced in the same year, are held by the UL in print only. Amadeo de Souza-Cardoso (1887-1918) by Jp Calosse is available to view online and contains many colourful illustrations reflecting the range of his work.

Giraffe (1905) by Pirosmani via Wikimedia Commons

The Georgian naive painter, Niko Pirosmani (1862-1918) also died in the 1918 flu pandemic. A self-taught artist who spent his life in poverty and obscurity, his renown grew significantly after his death. There has been a resurgence of interest in his works in recent years, culminating in a highly successful major exhibition held at the Albertina in Vienna in autumn 2018.  A few examples of his work can be seen online in Naive art by Nathalia Brodskaïa while more can be found at a public domain website.

While millions of people died in the 1918 pandemic many more who caught it survived. Edvard Munch (1863-1944), the Norwegian painter, was gravely ill with the flu in 1919 but recovered; he documented this in his artwork, producing self-portraits which showed him with the disease and afterwards. 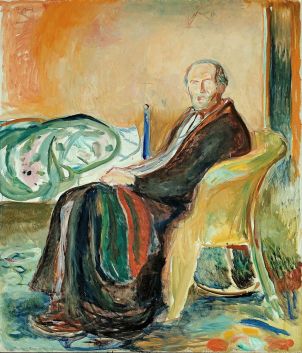 Self-portrait with Spanish flu by Munch, via Wikimedia Commons

Self-portrait after the Spanish flu by Munch, on cover of journal issue available online

To see more examples of Munch’s work you could take a look at the illustrations contained within Edvard Munch by Ashley Bassie and Elizabeth Ingles. A significant exhibition of over 270 works was held across two venues in Oslo in 2013 to mark 150 years since his birth. The UL has a print copy of the exhibition catalogue and more than 50 featured images are available to view online on a page of the Nasjonalmuseet website. 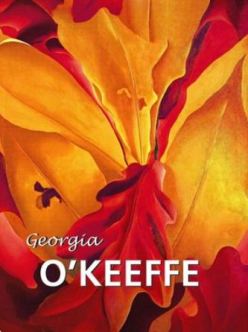 Another artist who not only survived the pandemic but went on to live to the age of 98 was Georgia O’Keeffe (1887-1986), the American painter. A resource which includes almost 100 illustrations is Georgia O’Keeffe by Janet Souter. An extensive digital collection of her work has also been made available online by the Georgia O’Keefe Museum in Santa Fe, New Mexico.

Google Arts and Culture, a platform which the University Library joined earlier this year, would be another good place to view works by the artists mentioned in this post along with the works of many others.