German literary life is supported and stimulated by numerous prizes which help authors in their pursuit of a literary career. Each October two of the most prominent prizes are awarded, namely the Deutsche Buchpreis and the Georg Büchner Preis.

The Deutsche Buchpreis is sponsored by the Börsenverein des Deutschen Buchhandels and awarded at the beginning of the Frankfurt Book Fair. This year’s winner was Anne Weber for her book Annette, ein Heldinnenepos. In this remarkable book Anne Weber tells the story of the French resistance fighter Anne Beaumanoir using the form of an epic poem. This brief video introduces the author and her book.

Anne Weber is well known for her literary experiments and has published several works of fiction. However, literary critics in Germany have agreed that Annette, ein Heldinnenepos is her best work so far and a worthy winner of the Deutsche Buchpreis. In particular the critics pointed out that the unusual literary form of epic poem was well used for telling the story of Anne Beaumanoir. For a summary of the reviews see Perlentaucher.

At the UL we have acquired Anne Weber’s works over many years and are looking forward to adding this latest book to our collections.

The Georg Büchner Preis is generally regarded as the most important German literary prize. It is awarded annually by the Deutsche Akademie für Sprache und Dichtung (German Academy for Language and Literature) to authors “writing in the German language whose work is considered especially meritorious and who have made a significant contribution to contemporary German culture”. The Akademie announces the winner in July and the prize is awarded at a ceremony in October.

This year’s prize went to the poet Elke Erb for her unique and individual oeuvre. Elke Erb can look back on a long literary career. Born in 1938, she lived since 1949 in East Germany where she studied and then worked as a literary editor for a publishing house before establishing herself as an author and translator. Her first works were published in the 1970s.

In 1985 she co-edited with Sascha Anderson the important anthology of East German literature Berührung ist nur eine Randerscheinung which could only be published in West Germany. In 1987 she published the critically acclaimed collection Kastanienallee: Texte und Kommentare which won her the Peter Huchel Preis. Since 1991 Elke has published numerous collections of prose and poetry, continuing her exploration of poetic possibilities. She is highly regarded by her fellow poets for the generosity with which she shares her knowledge and experience. 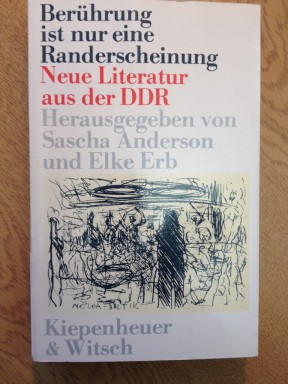 Elke Erb’s works are very well presented in the University Library. While we do not hold her very first publication from 1975, we do have the collection published by Wagenbach in 1976 Einer schreit ‘Nicht!’ (746:03.c.4.42). The library also holds copies of Berührung ist nur eine Randerscheinung (9009.c.2418) and Kastanienallee (9000.d.4212). Since reunification we have acquired Elke Erb’s publications comprehensively. Indeed, only recently we added her latest collection Gedichtverdacht (C200.e.433) to our collections.

It is said that poems are best appreciated when read aloud. We can listen to Elke Erb reading her poems at lyrikline.org.

Elke Erb is a most deserving winner of the Georg Büchner Preis and I hope that the prize will result in a wider appreciation of her exciting body of work.