This post is a celebration of the extraordinary cataloguing work of the Collections and Academic Liaison department over such a difficult year.  More than 21,000 individual new records for printed books and ebooks have entered the catalogue through our efforts, not including records added for the titles contained in ebook packages (these are added en masse through a cataloguing process called bulk import). 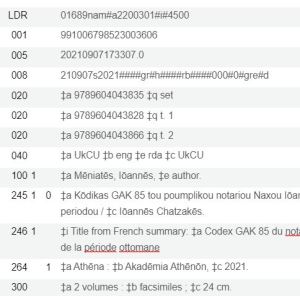 Part of a new Greek record I am working on (original script yet to be added!).

It can be hard to remember some of the details of the past 18 months, but we started being able to come back in to work in the UL only in September 2020, for the first time since mid-March.  During the November-January double lockdown period, we were allowed only 2 people in for 1 day a week; otherwise we have largely been at a maximum of 4 people in, but at least this has been a daily rather than a weekly allowance!  I’ve written before about the processes we put in place to allow print books to be catalogued and processed through a combination of office-based and home-based work (see here).  We’ve also had quite an amount of staff absence over the year, through vacancies and more.

There are a few things worth drawing out here.

A great deal of other languages have also been represented in our statistics over all years.  For 20/21, these include Afrikaans, Catalan, Greek, Romanian, the Scandinavian languages, and South-East Slavonic languages.

In terms of a print/e split of the statistics, detailed data isn’t easily available.  Traditionally, ebook cataloguing has been done by the ebooks@cambridge and English collection development teams of CAL, but the lockdown has seen many other CAL staff pick up ebook cataloguing too.  This has partly been to help out with teaching and learning purchases and partly to handle records for the increasing numbers of foreign-language research ebooks being bought.  Looking at the cataloguer-specific statistics, I would say that about 50% of our overall individual cataloguing statistics have been for ebooks in 20/21.  It will be interesting to see what the proportions for 21/22 look like.  While it has been critical that we buy ebooks where available throughout the lockdowns, print remains vastly important, particularly for our research collections.

I am hugely grateful to my colleagues for their incredible work over 20/21, and before – and since!  Hopefully we will have a rather more straightforward time of it overall in 21/22…  And to our readers: thank you for your book recommendations, and do continue to send them in.