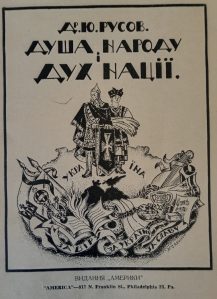 The decorative cover of ‘Dusha narodu i dukh nat︠s︡iï’ (The soul of a people and the spirit of a nation) by I︠U︡riĭ Rusov. The word across the middle reads ‘Ukraine’ and the three slogans at the bottom read ‘For faith, for Ukraine, for glory’.

Last year, I wrote about the first books to be catalogued from a donation sent to us by the Shevchenko Scientific Society in New York.  Today’s post looks at several other books in the collection which passed through my hands last week.

As I explained in the previous blog post, the majority of the donated books (many of which are fairly fragile) would go to Cambridge’s Library Storage Facility, from which they can be recalled to be consulted in the University Library.  When books are sent to the LSF, their records are suppressed from iDiscover – if ours is the only copy – until they have arrived there.  Since our department’s workflow involves books destined for the LSF going there only in occasional batches, most of the Shevchenko donations are yet to appear in the catalogue.  I’m afraid you will have to take my word for the fact that dozens of these donations will appear in iDiscover when the next delivery from us to the LSF takes place – probably within the next week or so.

In this post, I’ll give the unique record number for each book mentioned, which readers can use to search iDiscover in due course.

I was delighted to find among the Shevchenko donations a fascinating if short book celebrating the 70th anniversary of the Ukrainian women’s movement, Na hromads’kyĭ shli︠a︡kh (record # 991006817025103606), by Iryna Pavlykovs’ka.  The book was published in Philadelphia in 1956 by the World Federation of Ukrainian Women’s Organizations, which had been formed 2 years previously in 1954, the year of the anniversary.  In her introduction, Pavlykovs’ka explains that 1884 saw two women’s associations formed: one in Kyïv led by Olena Dobrohrai︠e︡va and the other in Stanyslaviv (now Ivano-Frankiv’sk) by Natalii︠a︡ Kobryns’ka.  Pavykovs’ka goes on in the book to examine these early beginnings and their successors, giving an overview of the situation of Ukrainian women in Ukraine and abroad as well as a broader picture of women’s movements and rights elsewhere in the world.  Ours appears to be the only copy of this title in the UK. 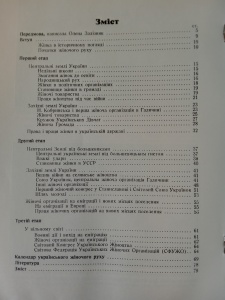 The front cover and contents page of Na hromads’kyĭ shli︠a︡kh.

Something that often strikes me when cataloguing books produced in the Ukrainian diaspora is the variety of locations of publication, each usually reflecting a sizeable Ukrainian émigré community.  For Canadian publications, for example, Winnipeg and Toronto are very common.  For US publications, New York, Philadelphia, and Chicago are standard.  Every so often I come across a place of publication that is new to me for Ukrainian material.  Last week, I came across two in Pennsylvania: Scranton (Skrenton) and State College (Steĭt Kaledz︠h︡).  The first was where a book discussing Ivan Franko in terms of his economics work was produced (record # 991006817025903606) and the second – a modern Ukrainian translation of the Galician–Volhynian Chronicle, which describes the events of the 13th century (record # 991006817024903606). 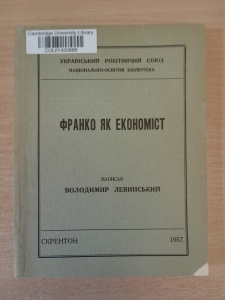 Front cover of the Franko book 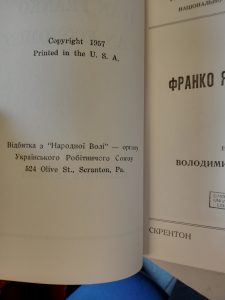 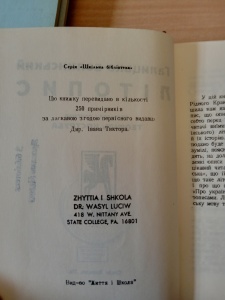 If any reader would like to see these books before they appear in iDiscover, do contact me at slavonic@lib.cam.ac.uk