Last autumn, the University Library exhibited several books signed by major Russian authors such as Ivan Bunin.  Vera Tsareva-Brauner, of the University’s Slavonic Section, who found the autographs, will talk about her extraordinary discoveries on 28 May at 5pm in the Library.  The talk is open to all.

END_OF_DOCUMENT_TOKEN_TO_BE_REPLACED

A new exhibition of Russian literary publications featuring handwritten dedications has opened today in the Library’s entrance hall and online.  Out of the shadows : post-1917 Russian emigration rediscovered has been curated by Vera Tsareva-Brauner of the University’s Slavonic Studies Section.  Vera found the first of the dedications while researching Nobel laureate Ivan Bunin, an unearthing which led to the five other inscriptions being brought to light again.  It is wonderful to be able to celebrate these re-discovered treasures. 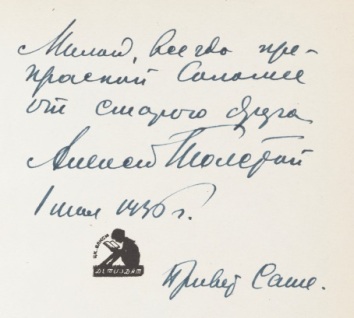 The six dedications (three by Bunin, one by Teffi, two by Tolstoi)

The exhibition marks the centenary of the start of the Russian Exodus. Following the revolutions of 1917, as many as three million people fled their native land, among them many of the best representatives of early 20th-century Russian culture. Most of the émigrés, including the writers Ivan Bunin, Aleksei Tolstoi and Nadezhda Teffi fled to Western Europe, where their determination to preserve their cultural heritage saw the effective creation of a Russia Abroad. The books which feature in the physical and online exhibition and which have never been shown before have original autographs by Bunin, Teffi, and Tolstoi.

The books will be on display in the Entrance Hall until 30 November 2018.  The permanent online exhibition can be accessed here:  https://exhibitions.lib.cam.ac.uk/outoftheshadows/