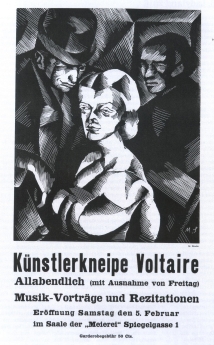 The literary author and cabaret artist Emmy Hennings (or Emmy Ball-Hennings) was one of the most fascinating figures in German literary life in the first half of the 20th century. Born in 1885, she worked in a variety of jobs before becoming a cabaret artist touring Germany, performing in famous venues such as Simplicissimus in Munich or Café Grössenwahn in Berlin. While in Munich she became a contributor to the literary magazine Simplicissimus and met her future husband, Hugo Ball. The pair moved to Zurich where in 1916, together with other artists, they founded Cabaret Voltaire, one of the key institutions of the Dada movement. At Cabaret Voltaire she became the star of the evening performances. The couple married in 1920 but Hugo Ball died in 1927. After his death she devoted her energy to editing and issuing his works. She herself died in 1948 in Sorengo in Switzerland. END_OF_DOCUMENT_TOKEN_TO_BE_REPLACED