The clocks have changed, the nights are growing longer, and the cold wintry days of Frimaire are now upon us. The French Republican calendar is not used anymore, but it was in use for a significant period of time following the French Revolution, and approximately up to the coronation of Napoleon. The UL and a number of college libraries hold numerous books published during this period, many of which have publication dates that are incomprehensible to the modern eye.

The Republican calendar was intended to remove influences of religion and monarchy, and as such the names of the months were derived from seasonal conditions or events such as fog or the harvest, and every day of the year was named to reflect some aspect of the rural calendar. November 27 this year, based on the most popular method of translating to the Gregorian calendar, is 7 Frimaire: the day of the cauliflower.

END_OF_DOCUMENT_TOKEN_TO_BE_REPLACED 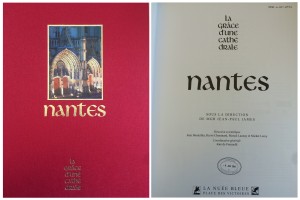 Last week’s fire at the Basilique Saint-Donatien in Nantes (excellent photo gallery) provides a good opportunity to talk about the series La grâce d’une cathédrale, and the associated La grâce d’une basilique. Published by La nuée bleue in Strasbourg, these are large format works focused on individual cathedrals and basilicas in France. The full list of published and forthcoming works is available on the series website—each of the extant volumes is available in the UL, and we will purchase the volumes once they are published.

END_OF_DOCUMENT_TOKEN_TO_BE_REPLACED

A University Library exhibition commemorating the bicentenary of the Battle of Waterloo opens to the public this Friday.  Among the exhibits is a Russian book reporting the Imperial Army’s offensives against the French in 1813.  One of its contributors, Field Marshal Kutuzov, was the subject of the first Slavonic item of the month, exactly two years ago.

The opening which will be on display in the exhibition.  It shows the list of casualties, in French (right) and Russian translation (left), of the French 5th regiment of Tirailleurs after withdrawal from Smolensk.

The book in question is Izviestiia o voennykh” dieistviiakh” Rossiiskoi Armii protiv frantsuzov”, pervoi poloviny 1813 goda [Reports on the military operations of the Russian Army against the French in the first half of 1813; 8586.d.84].  This 155-page volume, the second of two published, contains sources from the Russian pursuit of the Grande Armée far into Prussia in the months that followed the catastrophic close of Napoleon’s 1812 invasion of Russia.
END_OF_DOCUMENT_TOKEN_TO_BE_REPLACED

On December 19, 1964, Jean Moulin’s ashes were deposited in the Panthéon, where André Malraux (then Ministre des Affaires Culturelles) gave his eulogy. Watch the eulogy and read the text. Both Malraux and Moulin are now in the Panthéon, a testament to the important place that each holds in the cultural history of 20th century France. Given the immense influence that both had, it is not surprising that each is well represented in the University Library, and throughout Cambridge libraries. The purpose of this blog is to highlight areas of strength among libraries in Cambridge, so this post will talk about how the Liberation Collection has expanded the UL’s collections relating to Malraux and Moulin, and more broadly the Resistance. This collection is constantly growing, and when we first wrote about it, as the UL’s exhibition was opening, 320 books had been received by the Library and entered onto the catalogue. That number now stands at 450. END_OF_DOCUMENT_TOKEN_TO_BE_REPLACED

July 2014 marked the 70th anniversary of Antoine de Saint-Exupéry’s death – or, more precisely, his still-debated disappearance while flying over the Mediterranean. The legendary French aviator and writer needs no introduction, nor does his most famous work, Le Petit Prince. The internationally successful novella was first published in 1943 (in the USA initially, rather than Saint-Exupéry’s native France) and is now the most-read and most-translated book in the French language. The significance and influence of this author and work are reflected in the UL’s holdings: our catalogue lists well over 100 titles either by or about Saint-Exupéry, in most of the major languages we cover. 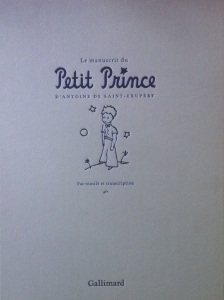 Le manuscrit du Petit Prince d’Antoine de Saint-Exupéry (S950.b.201.1914) is one of our most recent acquisitions relating to the author. This handsome edition – which contains the novella’s manuscript, both in facsimile and fully transcribed – has been compiled by the book’s original French publisher, Gallimard. Sadly, Saint-Exupéry did not live to see Le Petit Prince officially published in his home country. Although the 1943 US edition was issued in both French and English translation, the author’s outspoken anti-collaborationist views led to his work being banned under France’s wartime Vichy government. Therefore, Gallimard had to wait until after the war (and Saint-Exupéry’s death) to release the title.