This guest post is written by Dr Jaap Harskamp (formerly Curator of Dutch & Flemish collections at the British Library, who is now working on the University Library’s early Dutch books) 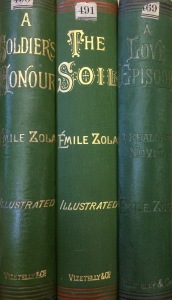 Victorian Britain was obsessively engaged in battling obscenity in print. In 1888/9 publisher Henry Vizetelly of Catherine Street in London was twice convicted of indecency for issuing two-shilling English translations of Émile Zola’s fiction. His prosecution was the result of pressure from the National Vigilance Association, a social-reform group established in 1885 which argued that readers needed protection from explicit sexual descriptions contained in novels such as La terre. The translations were suppressed, but not the French originals. In other words, literary value was contingent on a work’s presumed audience, rather than on its content. In response to the Vizetelly trial, The Methodist Times published the following editorial comment: ‘Zolaism is a disease. It is a study of the putrid … No one can read Zola without moral contamination’. Victorian society rejected the author as an ‘apostle of the gutter’. END_OF_DOCUMENT_TOKEN_TO_BE_REPLACED