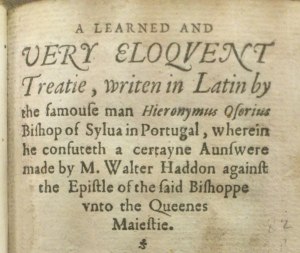 The pioneering work of Professor Tom Earle of St Peter’s College Oxford, Portuguese writers and English readers (B990.7.33 ; C204.c.9561), published by the Oxford Bibliographical Society in 2009, investigates the holdings of books by Portuguese writers printed before 1640 and held in the university and college libraries of Oxford and Cambridge. The core of the publication is a short title catalogue listing 906 items in a total of 2,343 copies. They are predominantly in Latin, of course, with a sizeable minority in Portuguese, but the listing also includes translations in English, French, German and Spanish. Whilst Lisbon is the most common place of publication (with 113 items), Lyon comes close behind (103 items), followed by Venice (92), Cologne (83), Paris (67) and Antwerp (60). Relatively few titles were published in London (23 items). END_OF_DOCUMENT_TOKEN_TO_BE_REPLACED