The University Library has recently taken out a subscription to the journal Gradiva : international journal of Italian poetry. 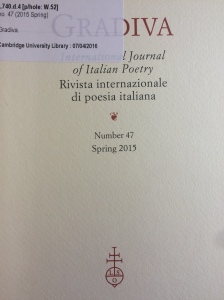 A recent issue of Gradiva

Created in 1975 by Adriano Berengo, the first issue was released in the summer of 1976. The first series of Gradiva ran from 1976 to 1982, and the main focus of the journal was to explore the relationship between psychoanalysis and literature. In 1982, with the second series and under new editorship, the journal became essentially a periodical of Italian literature and from that year on started to include creative texts. From the year 2000 to the present, the journal has devoted itself exclusively to Italian poetry and poetics, with an emphasis on the twentieth century and beyond.

Recently, it was taken over by the publishing house, Leo S. Olschki of Florence. The editor-in-chief of the journal is Luigi Fontanella, professor of Italian at Stony Brook University, and amongst the important international figures on the editorial board is the poet Valerio Magrelli. Now semi-annual, its issues include poems by Italian poets (with or without accompanying English translations) and poems by authors of Italian descent, as well as essays, translations, reviews, and interviews. It is an important resource for students of Italian contemporary poetry and the Italian poetical scene.

The journal stands at L740.d.4, with the latest issues in pigeon hole W.52 in the West Room.

Three new East View e-resources have been made available on trial, including the backfiles of the satirical magazine Krokodil and the literary journal Russkaia literatura.  In addition, we are also trying out a Russian e-book set, with trial access to the Dostoevskii : materialy i issledovaniia.  Feedback is keenly sought by Friday 1 May, to slavonic@lib.cam.ac.uk.

END_OF_DOCUMENT_TOKEN_TO_BE_REPLACED 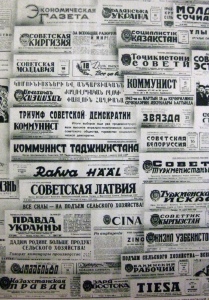 A collage of newspaper titles from across the Soviet Union, shown in Leninskaia Pravda, item 4 in the list at the end of the post.

The third CamCREES seminar of the term saw Dr Simon Huxtable talk about the changing role of the newspaper in Soviet society.  Under Stalin, papers focused on official and ceremonial information; actual news had a relatively small and controlled role to play.  This changed hugely under Khrushchev, with the rise of the sobkor and analysis.

The Soviet newspaper before Khrushchev’s time did not fulfil the function that one might expect – the conveying of news was not its main concern.  Dr Huxtable quoted Lenin on the role of the paper: ‘The newspaper is not only a collective propagandist and collective agitator, but also a collective organiser’ (page 11 in volume 5 of our main Lenin set, 231.d.95.88). END_OF_DOCUMENT_TOKEN_TO_BE_REPLACED 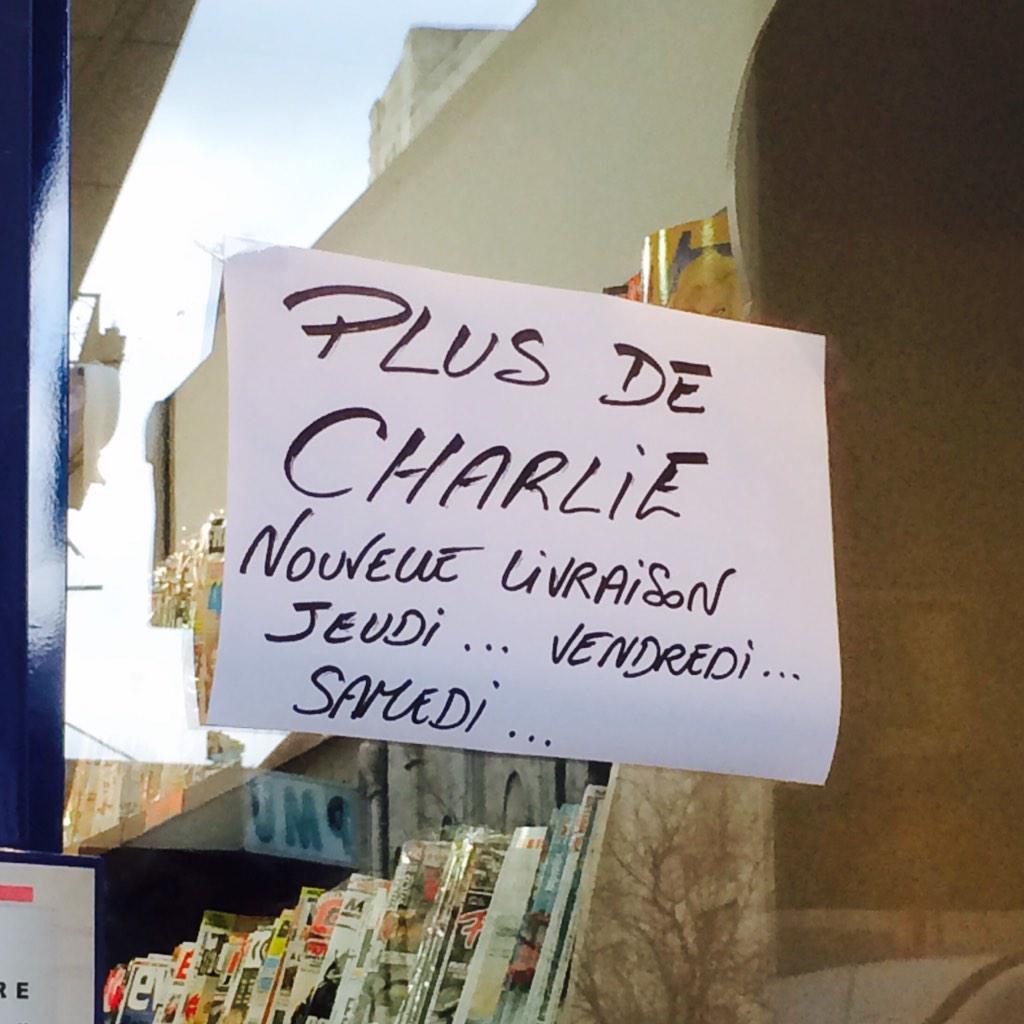 The University Library does not have a subscription to Charlie hebdo, although we do have a history of the magazine from 1969-1982 which stands at 735:45.c.200.287. We also have a few items with cartoons by Wolinski and/or Cabu, who both lost their lives in the terrorist attack on January 7th (2007.8.5590, 2011.10.645, 2013.9.2346). We were of course keen to get hold of a copy of the so-called “survivors” edition published on Wednesday January 14th. A former member of the European Collections and Cataloguing team, now resident in Paris, volunteered straightaway to get hold of a copy for me, but then discovered that this was by no means straightforward. On Wednesday morning she could find no copies in central Paris. She then phoned her local newsagent in the Paris suburbs, hoping she might have more success. He laughed and told her that he had had 100 people waiting outside at 6.30 am that morning, and that he had only managed to secure 40 copies. END_OF_DOCUMENT_TOKEN_TO_BE_REPLACED

Cambridge University Library is happy to announce its recent subscription to the Colombian magazine Art Nexus. 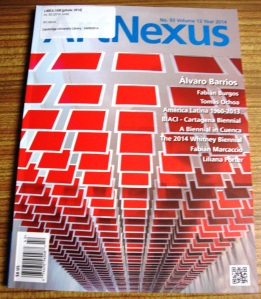 Art Nexus was originally published in 1976 as Arte en Colombia. In 1992 it changed its name to Art Nexus in order to raise awareness of Colombian and Latin American art worldwide. The magazine, published quarterly in English and Spanish, is a leading publication on Latin American and Caribbean art, with an emphasis on Colombia. Along with the ArtNexus.com portal, the journal has helped to draw attention to Latin American art and its impact on the global art scene. END_OF_DOCUMENT_TOKEN_TO_BE_REPLACED