A recent Russian arrival to the University Library takes as its subject tourism in the Soviet Union.  Skvoz “zheleznyi zanaves” : See USSR! : inostrannye turisty i prizrak potemkinskikh derevenʹ (Through the Iron Curtain : See USSR!  : foreign tourists and the spectre of Potemkin villages; C215.c.1563) is by Igor’ Orlov and Aleksei Popov.  Visitors to the Soviet Union normally saw the country in carefully choreographed tours arranged by the state agency Intourist.  Such control made sure that the tourists saw strictly what they were meant to see, hence the mention in the book’s titles of Potemkin villages – shorthand for ensuring that appearances support the desired narrative (the term comes from Catherine the Great’s favourite, Potemkin, pulling the wool over her eyes by assembling fake village fronts during a tour).

END_OF_DOCUMENT_TOKEN_TO_BE_REPLACED

Eighty years ago, a group of British trade unionists and co-operative members travelled to the Soviet Union for a 4,000-mile tour around European Russia and Ukraine. The archive of one delegate, Herbert Clinch, a printer from Kent, was presented to the University Library three years ago and is this month’s Slavonic item of the month.

The archive contains photographs, postcards, and notes from the Soviet Union, and additional ephemeral material such as money, cigarettes, and a poster advertising a talk Clinch gave on what he had seen.  Two articles by Clinch are also preserved in the archive: a piece he wrote for the Kent messenger in June 1935, shortly after his return, and one for the August 1935 edition of the Typographical circular.  In these, he expressed sincere admiration of the Soviet Union’s achievements.  His Kent messenger article starts:

It is not easy for me, a worker with my hands, to set down all that I saw in this marvellous country, where they do things on a scale so vast that it staggers the imagination.

END_OF_DOCUMENT_TOKEN_TO_BE_REPLACED 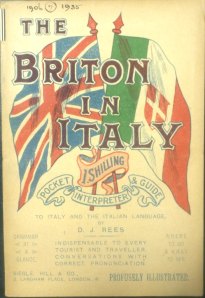 Whether you are an art lover, a food lover or both, a historian or a designer, or just sitting in your office thinking about your next holidays, there are many good reasons to learn Italian. Cambridge University Library holds numerous textbooks and conversation books to help you… in different ways.

The earliest is the 1612 The passenger: of Beneuenuto Italian, professour of his natiue tongue (classmark: Syn.7.61.265) which was aimed at educated Englishmen of Elizabethan and Jacobean times wanting to learn the language through familiar dialogues in parallel Italian and English text. As an example of the types of subjects covered, in the introduction to Dialogue II we see that “they use the phrases appertaining to meales, and sitting at table, and of discoursing of the nature of any meate, of remedies, of hurts, of hearbes, rootes, flesh, birds, fish and fruites: with excellent medicinall secrets, which teach the Traveller to keep himselfe in health, and to prolong life: and also speech of servants”. END_OF_DOCUMENT_TOKEN_TO_BE_REPLACED