Anyone interested in typography and book design will want to visit Ditchling Museum of Art + Craft in East Sussex this spring to see the exhibition devoted to the delightful work of Elizabeth Friedlander (1903-1985).

Born Elisabeth Friedländer (she anglicized her name on settling in Great Britain) into an affluent Jewish family, she studied typography and calligraphy under the renowned typographer Emil Rudolf Weiss. After completing her studies, she worked for the German fashion magazine Die Dame where she was responsible for designing headings and layouts. Her work came to the attention of the Bauer Type Foundry, one of the leading type foundries at the time, well known for commissioning and issuing modern and attractive typefaces (for example Futura by Paul Renner and Weiss Antiqua by Emil Rudolf Weiss). The foundry commissioned Elizabeth Friedlander to design a typeface. She finished the design in 1937 and the types were in production by 1938. “Elisabeth”, as the typeface became known as, is an elegant font, which cannot hide the influence of Emil Rudolf Weiss. 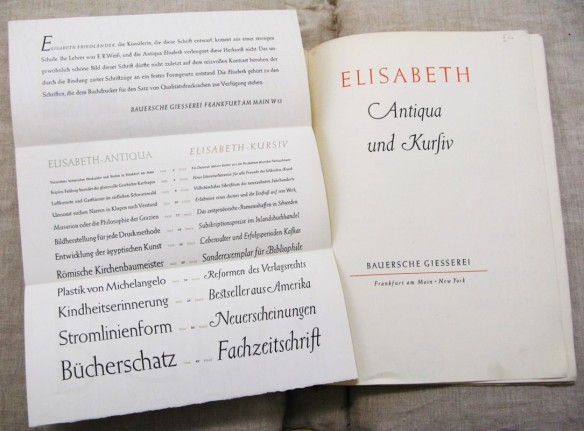 END_OF_DOCUMENT_TOKEN_TO_BE_REPLACED

Upon his death in 1898, Stéphane Mallarmé was working on a definitive edition of his work Un coup de dés, the iconic poem of European modernism, with the publisher Ambroise Vollard.  Mallarmé’s amendments to the text of the poem published in Cosmopolis in 1897 involve changes to the typeface and layout of the poem in order to emphasise his interest in structure and graphic layout. This edition was well advanced, and sets of proofs survive in the Bibliothèque nationale de France (BNF) and the Bibliothèque littéraire Jacques Doucet which have precise annotations relating to format, size and proportion. The text  was to include lithographs by  Mallarmé’s friend Odilon Redon, and was composed in Didot.  It was never published. 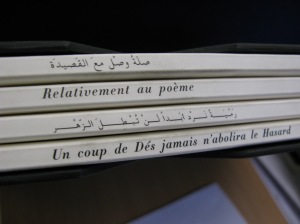 The first so-called original edition in book form, which was published by Gallimard in 1914 (a digitised copy of which is available through the BNF), ignored Mallarmé’s vision and intended layout. The University Library’s copy is missing, and perhaps Mallarmé would not have lamented its disappearance, since it is printed in Elzevir, a font which Mallarmé disliked, and the page size is wrong. Nevertheless, this version of the text became standard, and also the basis for most translations, including those in English. END_OF_DOCUMENT_TOKEN_TO_BE_REPLACED