The University Library has arranged trial access to four new electronic resources on offer from East View.  Please send feedback to slavonic@lib.cam.ac.uk by the end of Tuesday 7 February to meet Accessions Committee deadlines.  Resources with clear academic and student support will then be recommended to the Committee for purchase.

Access (available through Raven or within the cam domain) will last until 21 February.  Details about each backfile/database follow, with individual links.  All resources on trial can also be accessed through the general East View entry on this page. END_OF_DOCUMENT_TOKEN_TO_BE_REPLACED

In March 2014, a referendum was held in Crimea which saw its accession to the Russian Federation formalised a couple of days later, while Ukraine and most other countries continue to consider the vote (and annexation) illegal.  Two years on, we look at the latest books to arrive from Ukraine and Russia on the topic.

Books on other aspects of recent Ukrainian political history have also, of course, been continuing to arrive.  Among the most recent is the autobiography of Nadiia Savchenko, the Ukrainian military pilot recently given a long prison sentence for her alleged role in the murder of two Russian journalists (Sil’ne im’ia Nadiia (The strong name of Nadiia [note that “nadiia” is also the word for “hope”];  C210.c.9409)) and a couple of chronologies of the Euromaidan protests (Volodymyr Shcherbak’s Mii Maidan (My Maidan;  C204.d.4618) and Sonia Koshkina’s Maidan (C210.c.9408) – the latter also contains interviews with politicians and political activists).

END_OF_DOCUMENT_TOKEN_TO_BE_REPLACED

The 2015 Nobel Prize in Literature laureate Svetlana Aleksievich’s books bring together the narratives of witnesses to some of recent history’s most disturbing events.  The 1986 Chernobyl nuclear disaster was the subject of her book Chernobyl’skaia molitva (Chernobyl prayer; C203.d.7984 (in Russian) and 429:4.c.95.5 (in English).  This post looks at Aleksievich’s book and others on Chernobyl.

Svetlana Aleksievich’s name had been discussed in terms of Nobel recognition for some time, and the 2015 prize was awarded to her “for her polyphonic writings, a monument to suffering and courage in our time”.  In Chernobyl’skaia molitva, Aleksievich writes “this book is not about Chernobyl, but about the world of Chernobyl.  Thousands of pages have already been written and hundreds of thousands of metres of film recorded about the event itself.  What I am concerned with is what would be called “missed” history … I write and collect the feelings, thoughts, and words of everyday life … Chernobyl [for my subjects] is not a metaphor or a symbol: it is their home.”  This is her approach to all her work; her documentary prose provides a stark and compelling picture of events through its use of the voices of the ordinary people caught up in them, the “polyphonic” quality which won her the Nobel prize.  War has featured prominently in her writing so far, with women’s and children’s accounts of the Second World War and soldiers’ experiences of the Soviet-Afghan war accounting for three of her books.  These are among the nine books the University Library currently has by her; these are mainly in Russian (Aleksievich is a Russophone Belarusian writer*), but the number in English will doubtless rise thanks to her Nobel fame. END_OF_DOCUMENT_TOKEN_TO_BE_REPLACED 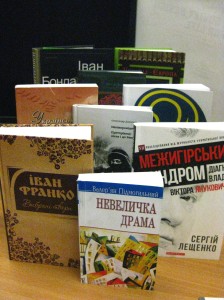 A selection of the books which have arrived so far.

Earlier this year, the University Library started to buy Ukrainian material by approval plan.  This method involves the vendor helping with selection by providing a tailored shortlist of books based on an agreed profile.  The first delivery of Ukrainian books selected in this way has recently arrived; this post examines some of the new arrivals.

Book selection is a major part of the work of the European Collections and Cataloguing department.  Several language areas are partially served by approval plans (a 2013 blog post discussed the French fine art approval plan), but this method had not previously been employed by the Slavonic section.  Small Ukrainian print runs, however, have often caused us to miss out on material we would like to have bought, and for this reason we decided this year to try out the use of an approval plan for material published in Ukraine.  In our profile, we stated that our main interest is in recent academic books in Russian or Ukrainian about Ukrainian or East European culture and history. END_OF_DOCUMENT_TOKEN_TO_BE_REPLACED

The University Library is currently running a small exhibition of Ukrainian diaspora material from the Peter Yakimiuk Collection in the main entrance hall.  The September item of the month is also from this collection – a book of drawings and wry caricatures of the horrors of Auschwitz seen through the eyes of a Ukrainian political prisoner.

Petro Balei was a Ukrainian writer and nationalist who emigrated to North America after World War II, a very common background among authors whose work is represented in the Yakimiuk Collection.  The majority of books by such authors in the collection usually cover Ukrainian history and politics, including personal narratives of active engagement in fighting during the war.  Balei’s work, however, is rather different – under the pseudonym Paladii Osynka, he produced a book of caricatures of life in Auschwitz, where he spent several years as a political prisoner.