Ralph Manheim was a prolific and gifted American translator, who spent the last seven years of his life in Cambridge. He currently has 226 entries in the University Library catalogue, and although he died in 1992, many of his translations remain in print or are regularly reissued. He worked mostly on German and French, but he also translated from Dutch, Serbo-Croatian and Polish; and, during the course of his work, he built a close working relationship with a number of major European writers from the second half of the 20th century. He is, perhaps, best known for his literary translations, but he translated a significant body of non-fiction in the fields of philosophy, psychology, politics, history of religions, art history and belles-lettres. Ironically, the work that launched him on his career was Mein Kampf.

Guest contributor Julia Allen-Manheim here paints a vivid portrait of some of her husband’s literary connections.

For most of his long career as a translator Ralph Manheim was living in Paris.

His apartment, once owned by the Joliot-Curies, was in the rue Froidevaux, the setting of Patrick Modiano’s Chien de printemps (1996.8.233), and he worked in a chambre de bonne in a large house overlooking the Jardin du Luxembourg, occupied for a time by the Mitterrands, both of whom he would occasionally run into as he climbed the back stairs.

Much of the life of a professional translator is a solitary slog. Ralph has written about his working methods and described the particular problems of wrestling with the prose of Grass and Céline in his article ‘In the translator’s kitchen’ (TLS 18.9.1970, p. 1041).   Translator/author relations can be tricky, and are influenced by, for example, the extent of the author’s knowledge of the language into which he is being translated, or the size of his ego.

Ralph was in contact with Grass soon after he started translating his novels and their relations were cordial. He would come to dine at the rue Froidevaux, a jovial guest who made the Manheim daughters laugh; and Ralph went to Brittany to stay with the Grass family, and there the two men indulged in some collaborative cooking.

Given the anti-semitism that pervades the works of Céline, it is, perhaps, fortunate that he was dead by the time Ralph started translating Mort à credit (held in four editions in UL). Nora Manheim, however, recalls a visit from his wife while her father was working on the book, ‘a strange character’ with ‘feet all deformed from decades of ballet dancing’. Ralph spent many hours in the Coupole with a French friend of roughly Céline’s age and background unravelling the eccentrically punctuated, colloquial, run-on style of the novels.

Ralph translated two plays by the Martinican poet and politician Aimé Césaire, La tragedie du Roi Christophe (2015.8.9405) and Une saison au Congo (2015.8.9615), and went over to his place for a number of working sessions. Nora accompanied her father when he went to deliver a finished typescript and remembers shaking hands with a tall, handsome, heavy-set man. Sadly, neither author or translator lived to see the Young Vic’s 2013 sell-out production of A season in the Congo.

Jacov Lind, in Paris with nowhere to entertain ‘a few friends’, asked if he might bring them to the rue Froidevaux, so Ralph went out to buy two dozen piroshkis and some bottles of wine. It was a freezing night; the doorbell started to ring over and over again as at least 50 incredibly jolly people began to arrive, all bearing food and drink, and suddenly there was an amazing party.

When Ralph was working on La vie devant soi (1978.8.75), deep secrecy surrounded its Goncourt-winning author, Emile Ajar; there was no question of their meeting. It was not revealed till years later that no such person existed, though someone was posing as him; the author was Romain Gary, who, by this deception managed to win the Prix Goncourt twice. 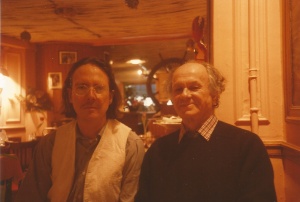 Peter Handke and Ralph Manheim (image courtesy of the author)

Peter Handke claimed Ralph as ‘mein Übersetzer’, and went so far as to write him into one or two of his books. They worked together over the decades, not always in perfect agreement, each having for the other a kind of wary respect. Ralph would drive out to the Paris suburb where Handke lived and eat cherries in his garden, and one late autumn, when the fountains were already boarded up for the winter, he went to Salzburg to get a feeling for the topography of the Mönchsberg, which features prominently in Across (748:39.c.95.37). After his death Handke wrote that he sometimes preferred Ralph’s translated version of his books to his own German (MS Add.9750/272).

Ralph spent his last seven years in Cambridge, working at his usual rhythm to within weeks of his death. When the Department of Nuclear Physics learnt that he had some of the Joliot-Curie’s furniture in his house, they sent round someone with a geiger-counter within 20 minutes; luckily his desk and the dining table turned out to pose no risk to health and safety.

The true story of Ah Q, poster (courtesy of the author)

Cambridge, with its competitive atmosphere and arcane rituals, is not an easy place for an in-comer, and it was a while before Ralph began to feel at home. The University Library opened up unimagined riches and friendships gradually formed. For the first time since embarking on the translation of Bertolt Brecht’s works in collaboration with John Willett, Ralph got to see two of the plays performed in English: The threepenny opera, put on by Robinson College and The resistible rise of Arturo Ui by Queens’. What the casts lacked in age and experience, they made up for with energy and enthusiasm; he was enchanted. In 1989 Stephen Unwin directed Handke’s dramatic poem, The long way round (1989.7.3247) at the National Theatre (Cottesloe) and Ralph heard his words spoken by professional actors. The following year, Christoph Hein’s The true story of Ah Q, translated in collaboration with Seán Allan, at the time a PhD student, now reader in German at Warwick University, premiered at the Soho Poly Theatre. The text was later published in Christoph Hein in perspective (L570.c.40.51).

Ralph was never interested in the critical analysis of the works he translated, and distrusted notions of translation theory; however, he loved solving specific translation problems. To his great delight he was invited to the occasional German department graduate seminar, submitting for discussion along with everyone else an anonymous sample of a chosen text. He always carried a notebook in which he jotted down foreign vocabulary and when he moved to Cambridge his keen linguist’s ear tuned in to the idioms of British English. Returning from the market one day, he said, ‘Had you noticed when you give people the right money that they always say, “Lovely”?’