Cambridge University Library holds six large volumes of illustrated plates entitled Collection de caricatures et de charges pour servir à l’histoire de la guerre et de la révolution de 1870-1871 (KF.3.9-14). Among those, the digitisation of volume 1 is now available on Cambridge Digital library. This is a set of highly interesting primary material, visual sources dealing with the Franco-Prussian War and the Paris Commune. The caricatures, most of them coloured, make fun of politicians and public figures of the time, soldiers and civil populations during the war and the siege of Paris by the Germans. They were probably assembled in Paris shortly after the events, then brought to London, where several sets were compiled and subsequently sold or donated to different institutions, up to the 1880s: the British Library (at least 10 vols), Heidelberg University Library (9 vols), the Victoria & Albert Museum (9 vols), Cambridge University Library (6 vols) and the Bodleian Library (1 vol.).

Prominent political figures are an obvious target of the caricatures, whose understanding and comical effect assume some knowledge of the historical and cultural context. The first illustration in the Cambridge set of caricatures, by Louis Jaugey, entitled “Before the war” is of Napoléon III as a proud peacock, wearing imperial insignia and the chain of the chivalric order of the Golden Fleece. Across his chest is a red sash bearing the date 2 December 18[5]2, when Louis-Napoléon Bonaparte, then President of the Second Republic, became Emperor Napoléon III after a coup d’état. Although he has piles of bags overflowing with gold and silver coins labelled “war budget” and “taxes”, he has nothing to show but a magnificent appearance and in lieu of an army, a group of three paper cranes in the French national tricolour blue, white and red. Napoleon III is both animalised and infantilised, putting on a narcissistic performance and playing with childish toys (see the paper cranes featuring in the 1870 paintings L’Enfant et l’Oiseau and Les Rieuses by Carolus-Duran).

This caricature can be understood in the context of the French defeat against the Prussians (“La Débâcle”, as in the title of the related novel by Émile Zola, translated into English as “The Downfall: a story of the horrors of war”). The 1870 Battle of Sedan, where the emperor himself was captured, led to the collapse of the Second Empire and the birth of the Third Republic. The subtitle of the caricature: “sur l’air de Fleur de Thé” is a reference to the 1868 popular operetta by Charles Lecocq where a French cook, whose boat is captured by Chinese troops, is rescued by his wife (Louis-Napoléon later joined his wife Eugénie in exile in London). It undermines Napoléon III, showing him as a comical theatrical character rather than as a substantial military leader.

The text under the caricature of Napoléon III is even more suggestive, with the blurb: “I drink everything… I eat everything… I put my tail everywhere”, implying that he is a drunkard, a glutton and a lecher. The daisy on the first of the paper cranes is an allusion to the emperor’s mistress, Marguerite Bellanger. The repetition of the first syllable of “par…tout”, which emphasises the debauchery of the emperor (with a literal representation of a tail as a devilish serpentine appendix), evokes a comic stutter and/or the artificial enunciation of the opera singer, and reminds us of the peacock’s loud and unpleasant cry. 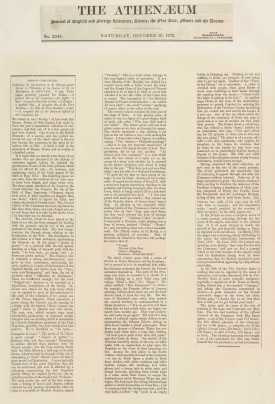 So far, provenance information relating to the different volumes of 1870-1871 caricatures suggests the agency of the London-based booksellers Dulau & Co. A crucial clue as to the origin of the collections of 1870-1871 caricatures is a cutting of an article from The Athenaeum (Journal of English and foreign literature, science, the fine arts, music and the drama), dated 26 October 1872, which is pasted into the front of the first volume in the Cambridge and the Heidelberg sets. The Dulau firm appears to be responsible for the similar binding and title page of the different volumes of caricatures.

The Athenaeum article says one set is in the British Museum, another one, “less perfect” and “unbound”,  in the possession of “one of the chief actors in the war”, purchased for 90 or 100 pounds, and a third one, made of six volumes, which is then described in details. While the fifth and sixth volumes of caricatures contain “chiefly German caricatures”, there are additional (complete) sets of satirical journals: La Lanterne, Le Sifflet, Le Grelot, L’Eclipse, Le Père Duchêne, Le fils du Père Duchêne, the Journal Officiel of the Commune, etc. One wonders if the aim of the article was not to attract the attention of a potential buyer for Dulau, especially as the conclusion gives a clearer hint about the identity of the private owner, a “Prussian statesman”, and emphasises what good value the price of 100 pounds was, compared to the cost of the French periodicals: “his purchase is no bad investment”. 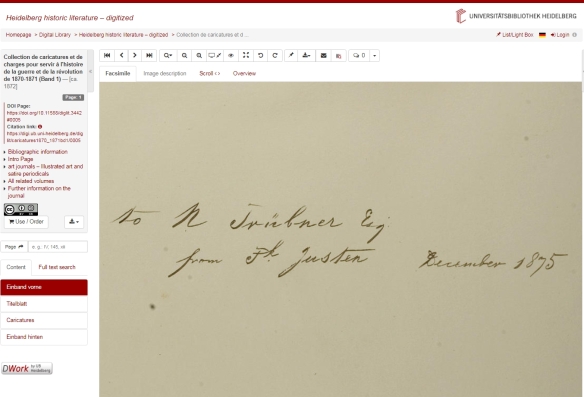 A dedication in the first of the Heidelberg volumes suggests that Frederick Justen, German assistant at Dulau, who later took over their business, donated that set of caricatures to another bookseller then based in London, the German antiquarian Nikolaus Trübner.

As part of the preparation for a future collaborative research project led by 19th century French Cambridge professor Nick White on the 1870-1871 caricatures, Cambridge University Library photographic studio has just digitised the first volume of the Cambridge set. We want to use this digitisation and improvement of library catalogue metadata to raise awareness of this collection by making it available online and foster a better understanding of the making and history of the different sets, exploring the digital humanities research potential of these images. Digitisation is a formidable tool to explore the different, non-identical, though overlapping sets of caricatures now dispersed across different library collections.

The caricatures are not unique: their production was part of a wider journalistic and artistic dissemination of news, social and political thoughts and criticism in the context of the Franco-Prussian war and the Paris Commune. Examining the collection and creation of the different sets, in relation to the history of the contemporary press and the larger circulation of individual issues and unbound plates will also help us to grasp the role of this visual medium in understanding, representing and shaping the popular culture of the time.

New digital tools and methods will be tested and developed in order to bring together digitally and compare the different sets collected and bound by Dulau. The International Image Interoperability Framework (IIIF) is endorsed and promoted by research, national and state libraries, museums, companies and image repositories who support the development of compatible image serving and viewing software. It allows users to view and compare digital images across different collections, such as two different medieval copies of the same text, or the scattered leaves of a dismembered manuscript now spread between several institutions. IIIF allows the user to retrieve both the digital images and the metadata, which includes keywords, transcripts of captions and signatures of artists, largely as a result of Optical Character Recognition (OCR).

In the case of the 1870-1871 caricatures, this will enable the Cambridge digitisation project, supported by the University Library Digital Content Unit and the Cambridge Digital Humanities network to build on the previous digitisation of the Heidelberg set. This will facilitate the identification and comparison of similar caricatures in each set, leading to a better understanding of the creation of those collections and their individual features.

A key digital tool which will be used and developed in order to facilitate the matching and comparison of the images held in different sets is the Image Search Engine (VISE) developed by the University of Oxford Digital Humanities, with Giles Bergel from the Visual Geometry Group. On 14 May 2019 in Cambridge University Library, Giles Bergel and Leonardo Impett  are going to lead a 3 hour workshop  on “Computer Vision and the Digital Humanities: Practical Applications“, using the VISE tool and the digitised images of Cambridge and Heidelberg caricatures. Using the indexed Heidelberg images as the database of reference, a demonstration tool shows that is possible to check 1870-1871 caricatures from Cambridge -and anywhere in the world- against the Heidelberg images (with positive returns for digitised caricatures of the Musée de l’Armée collection in Paris for example). The demonstration interface can tell you if the same image features in Heidelberg, and further developments could lead to the possibility of linking to and using the relevant Heidelberg caricature metadata and description. The full digitisation of the Cambridge set would enable us to use VISE for a batch comparison of the Cambridge and Heidelberg collections. The reference database could then be expanded to the Cambridge collection and more.

In the long run, the use of automated image analysis techniques on the digitised content will enable the categorisation and comparison of the different volumes of caricatures. A future interface would include both an images-matching tool and metadata search and display, as well as an annotation tool for researchers. It could enable the retrieval of clusters of caricatures based on the use of metadata keywords or facial recognition algorithms (say, for all representations of Napoleon III).  The digital aspect of the caricatures project would also foster the trial and development of computational analysis for colour comparison, which raises technical challenges and is a growing field of research. The future research project on these caricatures of the Franco-Prussian War and the Paris Commune will reinforce existing collaborations between the libraries and cultural institutions who hold similar sets and caricatures. The image matching interface could quickly become a global reference tool for research on 1870-1871 caricatures.

Morna Daniels, “Caricatures from the Franco-Prussian War of 1870 and the Paris Commune”, The Electronic British Library Journal, 2005.