The opening page of the book, complete with woodcut and ornamental lettering.

Earlier this year, the Friends of the National Libraries generously funded the purchase by the University Library of a 1648 book called Kniga o vere edinoi istinnoi pravoslavnoi [Book on the one true Orthodox faith].  The volume, bought from a major dealer, had latterly been part of the Macclesfield library at Shirburn Castle in Oxfordshire.

This exceptionally rare book of Orthodox liturgy and theology in Old Church Slavonic is an exciting addition to the collection of early Slavonic books found across collegiate Cambridge.  Much of the content is is derived from the earlier writings of Zakhariia Kopystens’kyi, Archimandrite of the Kyivo-Pechers’ka Monastery.  The book, printed by Stefan Boniface (Stefan Vonifat’ev), a prominent protopope, was published in febrile times for the Russian Orthodox Church. Within only a few years, the great Raskol (schism) occurred, triggered by the official church’s re-alignment of practices with their Greek roots, a schism which saw the emergence of the Old Believers movement.  The fact that this book, which contains a synthesis emerging out of the encounter between Orthodoxy and Latin (Jesuit) education in the Polish-Lithuanian Commonwealth, appeared just as this restoration of practices rooted in the Greek tradition was gaining speed might explain why so few copies remain.  Ours is one of only six recorded copies worldwide.

Cataloguing the book was quite a challenge, and I am hugely grateful to Professor Simon Franklin of the University’s Slavonic Studies section for his help.  The challenges lay entirely in deciphering the text in front of me.  I am not a confident reader of Old Church Slavonic and felt close to losing my mind as well as my patience untangling the ornamental red text on the book’s first page (shown above) and understanding the various omissions employed throughout (eg стых for святых (holy [genitive plural])).  Even with the text unfurled and understood, transliteration according to the Library of Congress rules for Church Slavic was also challenging.  Taking only those letters which transliterate to a form of Latin “e” alone as an example, I had four variants, as shown in the picture here!  The challenges of transcribing and transliterating Old Church Slavonic are explored in this section of the Slavic Cataloging Manual.

If the printed text felt challenging, the two Russian manuscript notes of ownership would have been wholly beyond me without the book dealer’s work on one and Professor Franklin’s guidance with the other.  The inside cover records the purchase by a near-contemporary owner, Khrist’ian Khristian’ov, son of Hoppe, in 1675.  A theology and philosophy student in the city, Khristian’ov identifies himself as an inozemets (foreigner) from Beeskow in Lusatia, an area now in Germany and Poland.  A transcription and translation of the text follows below. 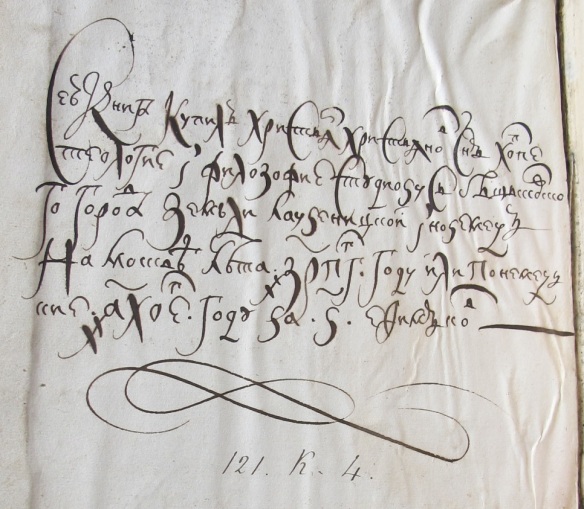 This book was bought by Khrist’ian Khrist’anov, son of Khoppe, studying theology and philosophy, a foreigner from the town of Beeskow in Lusatia, in Moscow in 7183 or 1675 in the German style for 6 efimki.

Those who can read the original text will note that the dates are given in letters and not numerals!  This was standard at the time, but adds another level of complexity for the cataloguer.  The anno mundi date normally then also needs to be “translated” into an anno Domini date, but Khrist’ian has provided this for us.  More about anno mundi and other Slavonic dating systems can be found here.

The other provenance statement is recorded on successive recto pages, in the bottom margin.  Taken one page at a time, the text was extremely hard to read (impossible, if I am honest, without Simon’s help), but putting the individual sections together as shown below helped greatly because it allowed for easy comparison of letters by this quite challenging hand.  The statement records ownership by a clergyman called Iiakov (Jacob), possibly the very first owner of the book.

The long final line (which reads о девице пречистая – мати благословенная – от всех родов избранная (O Immaculate Virgin, Blessed Mother, chosen of all peoples)) does not continue the page-by-page sequence; it comes from the inside back cover of the book.

This book called On faith belonging to the Pokrovskii protopope Iiakov, he signed with his own hand and sold for ???

The book’s catalogue record, whose diacritics look their best in Google Chrome, contains a very lengthy contents note which gives the title of each of the 31 chapters.  If it seems hard to read, I can assure you it was also no walk in the park to transcribe.  Chapter-level contents notes are exceedingly uncommon, but the importance and rarity of this book meant that it felt appropriate to provide one here.  A list of the chapters in German translation can be found in Hans Peter Niess’ Kirche in Russland zwischen Tradition und Glaube? : eine Untersuchung der Kirillova kniga und der Kniga o vere aus der 1. Hälfte des 17. Jahrhunders (1977, P66.c.32.11).

The contents include treatises against heretics, Catholics, and traitors to the Orthodox faith, the state of religion and belief in Orthodox Eastern Europe, the differences between the Eastern and Western churches, the significance of icons, apostolic power, churches, the role of the Patriarch, and more.  There is no festive chapter which would allow us to tie the post in more nearly with the time of year, but here is an excerpt of a page which shows an example of rather pleasing star asterisks used occasionally in the book’s printed text.

Happy Christmas wishes to all our readers.