It is hard to believe that the three-month anniversary of the 2022 Russian invasion of Ukraine occurred this week.  As the war slips down the headlines despite the ongoing intensity of fighting, air attacks, and civilian and military loss of life, it is more important than ever to talk about the war and share information about it and the country it is being waged against.

When I was recently in the UL’s Maps Room, looking at a map of Mariupol, I also spent some time looking through a 1962 Soviet atlas printed in Moscow about Ukraine and Moldova.  It struck me again and again, as I studied thematic map after thematic map, how extraordinary and ridiculous it is that Ukraine – the largest country wholly situated within Europe – was so little known to the majority of the world until this year.  Even the events of 2014 – the Maidan protests, followed by illegal annexation of Crimea by Russia and the outbreak of war in East Ukraine led by Russia-backed separatists – didn’t manage to put this huge and fascinating country on the map of most people’s minds, which is in part why the 2022 Russian invasion is often not understood as having had – despite the shock of the actual invasion – an 8-year lead in. 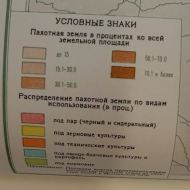 In these pictures, Ukraine – with Moldova along its south-western flank (the pairing in the atlas is of the two most south-western Soviet republics; it doesn’t reflect any specific geopolitical structure beyond that) – is shown in terms of arable land cover and its use, complete with a legend (middle) and two tables (either side).

The background colour spectrum shows the proportion of the area used as arable land; Ukraine is chiefly above 50%.  The one table I forgot to take a photo of – the one in the top right-hand corner of the main picture – says that 57.3% of Ukrainian territory was in 1958 arable land.  The legend to the circles on the map relate to the use this arable land is put to.  Almost every circle is at least half yellow, indicating grain crops.  The legend is:

Ukraine’s importance as a food producer has continued.  Some of the books that came out of the last census of Ukraine (held in 2001; see this blog post) focused on employment figures, and this ebook shows on page 32 that over 21% (3.7 million) of a total of 17.25 million working Ukrainians were employed in agriculture.  According to the statistics of the UN’s Food and Agriculture Organization, which are searchable here, Ukraine was the world’s 8th largest wheat producer in 2020.  The Russian invasion is both affecting Ukraine’s ability to grow and harvest goods like wheat whether for domestic or foreign consumption and also preventing exports, with potentially fatal consequences for millions, including many of the most vulnerable, all of which is covered in this recent BBC article.

The atlas this map came from will feature again in future blog posts.  I’ll end with the heartening news that we are expecting arrivals of new Ukrainian books soon.  To my amazement, our Ukrainian book supplier’s agents have renewed their work where they feel it is safe to do so (a point we have been careful to make ourselves to the vendor).